The Ranch at Laguna Beach: The Grand Dame’s Final (and Most Spectacular) Legacy 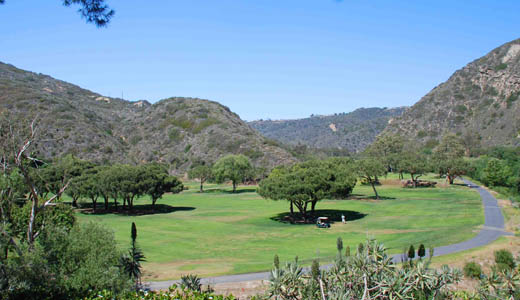 In 1871, she welcomed the first home in Laguna Beach.

It’s a fitting honor for this grand dame, who’s so reticent of the spotlight that most people drive right past her without even looking in her direction. Those who have stopped to get to know her, though, come away with a memory that lasts a lifetime.

For Mark Christy, it’s high time this beauty was introduced to a much larger audience of admirers.

She is The Ranch at Laguna Beach, formerly a.k.a., The Thurston Homestead, Ben Brown’s and Aliso Creek Inn (Hey, every grand dame is allowed a few name changes over the course of a lifetime.). 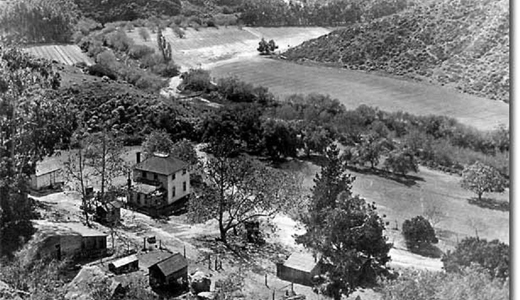 From the entryway on Coast Highway, you wonder how a hotel and a 9-hole golf course can be tucked back in what seems like such a tiny space. Drive a few hundred yards into the interior, though, and The Ranch offers a stunning enclave that meanders beneath towering canyon walls.

“Most people think they’ve taken a wrong turn when they first turn up our street,” says Director of Sales & Marketing Jim Tolbert. “But once they make that final turn and the entire canyon opens up in front of them, they’re just stunned. The Ranch is not what anyone expects.”

The Ranch is the “yin” to the rest of Laguna Beach’s “yang.”
Not even a quarter mile away, the Pacific pounds its way onto the beaches and rocks, and thousands of visitors create their own riotous color palette of beach blankets and umbrellas. There is a constant thrum of energy and activity in Laguna Beach.

In contrast, The Ranch is sublime serenity.

“We have people tell us that as soon as they get beyond the first hole of the golf course, everything changes for them,” says General Manager Kurt Bjorkman. “She just has that kind of way about her.”

Since Mark Christy and his team took over as The Ranch’s new “caretakers” in late 2013, they commonly refer to the property as “her.”

“This girl has plenty of personality and – I suspect – many stories to tell,” says Christy. “She’s just so darned charming that it’s made all of us that much more committed to giving her the spotlight she deserves.”

While daily golfing, family events and catered special events continue through the summer at The Ranch at Laguna Beach, late September and early October will see the actual spotlight switched to “ON” when renovations are completed for the hotel and banquet hall/restaurant. (See more details at TheRanchatLagunaBeach.com )

“Renovations” Meaning Building Back Up from the Foundation
Most folks around town think Mark Christy is merely sweeping out the dust on the old hotel room floors and changing a bit of wallpaper here and there. 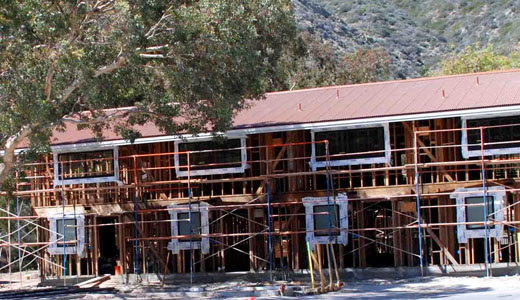 Oh no no no. What’s happening here is big … very big. But when all the new is completed, it will look as if she’s been settled here for decades.

The Ranch at Laguna Beach is returning to her roots, evolving in a lovely, turn-back-the-clock sort of way as a classic, beachy cottage resort.

“In all my years growing up, I spent just about every weekend at Crystal Cove in my grandmother’s Cottage #9,” says Christy. “That relaxed, nostalgic kind of feel is what The Ranch imbibes, but it’s also going to be very chic and very cool. We call it ‘unpretentious luxury meets coastal ranch chic.’

Her Story Till Now

Naming her officially as “The Ranch” came just as easily to the new owners. “We never really sat down and had a brainstorming session on what we were going to call her,” says Bjorkman. “From Day One, this was “The Ranch.” She just had that old-school, relaxed vibe about her.” 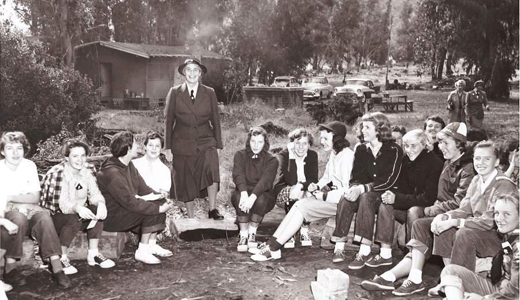 Indeed, “The Ranch” was her first name when the Thurston Homestead was established here in 1871. Remnants of the first cottage were recently found at the golf course’s third hole. Cattle guards still remain in primary roads. And almond and walnut trees are still producing their wares, having been planted more than a century ago as part of the working ranch.

In 1927, The Ranch was host to the first Girl Scout camp in California, and in 1950 she was named the Laguna Beach Country Club. In 1960, she was sold to Ben Brown, who had plans for a 10-story hotel.

While the towering blueprint was actually approved by the City in 1961, the local and national economy wasn’t stable enough to support Ben’s plan. So, Brown resorted to opening a rambling 64-unit apartment complex in 1963, instead. The lovely 9-hole golf course and a hexagonal home for the Browns followed suit.

Brown’s widow held on to the place for decades, finally selling to Aliso Creek Properties LLC in 2004. The Montage Resort managed the property and made upgrades through mid-2013 until the LLC entertained Mark Christy’s purchase requests.

A Stunning Canyon Experience
When Aliso Creek Properties stepped out in November 2013, Christy and his team moved in like a military operation. 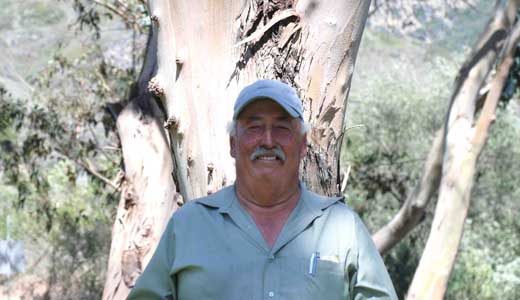 While workers began dismantling the hotel roofing and walls, another crew tackled the overgrown golf course, led by none other than Gilbert Briseno. Gilbert began working on Ben Brown’s golf course in 1963 (50 years ago!) as the first Caddyshack “gopher getter,” and was subsequently hired by Fred Lang, the landscape architect in 1968.

In the many years since, Gilbert has become known as the area’s “Tree Whisperer,” as he renovates and reinvigorates plant life everywhere. Since November, Gilbert has worked tirelessly with crews, clearing yards of poison oak lining the course, cutting down diseased pines that threatened healthy tree neighbors, filling 40 dumpsters with invasive weeds and fire-hazard overgrowth, and saving the lives of many trees and plants that others would have been uprooted.

The result? An unbelievable “new” view that golfers didn’t even know existed.

For starters, you can actually see the canyon walls and interesting caves on either side. Trees and bushes have sprung back to life. The once-clogged creek now chuckles happily along. And the overgrown site that initially served as the Girl Scout Camp is now a gorgeous, wide-open venue for special events (nicknamed “Scout Camp.”) Even better – erosion hazards throughout the course have been fortified with repurposed red cedar planking that once housed the hotel’s carports. 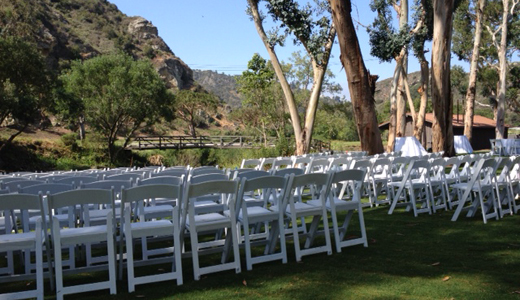 Nostalgia Draped in Modern-Day Luxury
As Christy moves from the golf course tour to the hotel renovation explanation, he is positively gleeful.

“If you want to enjoy your honeymoon in seclusion, you can have that. And, if you want your entire wedding party in a series of hotel rooms that converge onto one courtyard, you can have that, too. This is as individualized or as group-oriented an experience as you wish it to be,” he says.

The Ranch’s original 64-rooms have been expanded to 97 approved hotel units, including 64 large hotel rooms, nine studios, three massive suites and 20 “cottages” that feature 1,125 square feet in an upstairs/downstairs layout. Lastly, the hexagonal Brown house (now named “The Treehouse”) will be included in the rental mix as a separate, two-story home that overlooks The Ranch’s green expanse.

In keeping with the beachy cottage nostalgic feel, the hotel is topped in rusted corrugated tin roofing and “every furniture and décor item you see in the hotel rooms will be ‘found’ items.

“We want a very relaxed, beach cottage feel. Even our air conditioning units will be stealth,” Christy says with a grin.

Even as the giant, gleaming kitchen continues to cater to incoming, weekly weddings and events, the banquet hall, private dining rooms and primary restaurant are undergoing staged renovation, too.

Here, the ceilings will be popped for another 6 feet of height. Over here, the banquet room will be extended onto a 3,000-foot deck. Behind this bar here, floor-to-ceiling glass windows will slide effortlessly open and closed. Even the hotel lobby’s location is changing to create a greater “sense of arrival” for guests.

A Magnetic Pull
As we chat, Camron Woods trots in from the same lobby we’re discussing. He is the new Director of Culinary Operations, having recently moved from his Executive Chef’s role at the Grand Del Mar’s Amaya restaurant.

Assuredly, the Ranch has attracted a veritable “who’s who” in the hospitality industry.

“I was working at my 13th hotel, and it was a pretty amazing place, but I just knew I had to be here at The Ranch,” says GM Bjorkman. “For the most part, people in the hospitality industry consign themselves to a rather nomadic lifestyle – movement is normal. But I know my entire career has led to this project. I’m submerged completely, every day; there’s just nothing like it.”

Adds Tolbert, “Every day I drive up here, I feel folded into the family. There’s a sense of commitment here from everyone involved; it’s become a real labor of love.

“It’s important that we give The Ranch her chance to really shine in front of the Laguna Beach community … and a global community as well. She IS the unique culture of Laguna Beach,” says Tolbert. 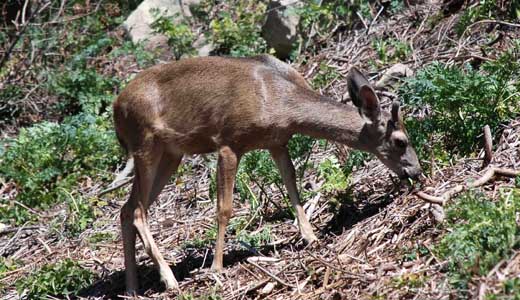 Bjorkman sits back in his chair and thinks for a moment. “When you decide to make a career in hospitality, you make a commitment to serve others above yourself.

“And when you think of this place – The Ranch – as a personality, it’s so fitting because she just has this great energy … this air of ‘service’ and graciousness and welcome.