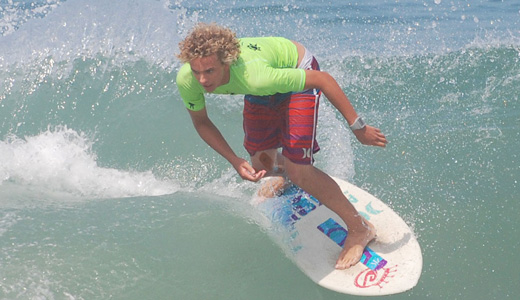 Despite a wild and wacky weekend of waves and weather, Exile Skimboard Pro Blair Conklin, took his first championship crown at “The Vic,” this weekend.

Two-time Vic champion Sam Stinnet took 3rd place, with Bill “Beaker” Bryan – the winningest Vic Skim champion of all time – taking 4th. Once again, Laguna Beach skimboard pros dominated the waters on the men’s side with eight of the top 12 professional boarders having grown up in South Laguna Beach. (There’s something to be said for cutting your teeth on West Street’s formidable Mini-Wedge.)

Conklin’s win gives him a serious leg-up from his current 2013 United Skim Tour (UST) 7th place standing. To date, Sam Stinnet has dominated the 2013 skim season and was, until Sunday afternoon, nearly 1,000 points ahead of Conklin and leading  300 points ahead of 2nd-place ranked Perry Pruitt. This year – and for the first year in many – The Vic championship has significantly shaken and stirred the Top 10 rankings in the UST.

A wild and woolly skimboarding weekend

“The Vic,” the world’s oldest and most prestigious skimboard contest event, raked in more than 130 amateur and pro contestants and hundreds of spectators at Aliso Beach. In some of the wackiest weather conditions The Vic has yet seen, skimboarders battled the weekend’s melodramatic moods as it presented – at various times – pea-soup fog, brutal onshore winds, blistering heat, and an unusually high swell that sculpted a sizable cliff drop to the water’s edge and slopped itself well into the crowd at high tides.

Because so much of the usually expansive beach had been carved away, the judges’ scaffolding and roped-back fans practically stood on the heads of the competing skimboarders, adding to the pressure of the high-stakes event.

Despite Mother Nature’s capricious moods, The Vic moved along at its ever-efficient speed. And, true to form, the throng of devoted spectators  learned to quickly duck from flying beach canopies, gallop to safety as one herd when high waves charged, and go through the motions of layering on and layering off – repeatedly – as humidity and heat gave way to pelting cold winds.

The pros enjoy nearly three weeks off before heading to their next event at the Outer Banks, North Carolina.