Tuesday’s Laguna Voice at Mozambique is Blowing the Doors Off 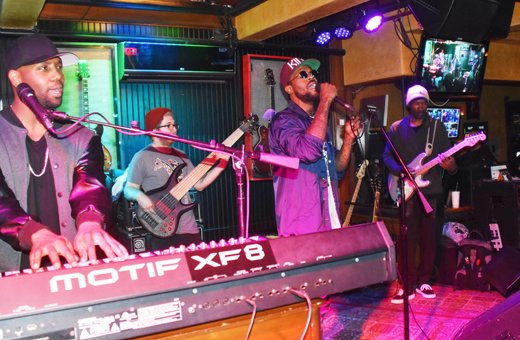 This ain’t no karaoke contest!

Laguna Voice, billed (quite believably) as O.C.’s Biggest Singing Competition, is just plain phenomenal. Some of the best music you’ll ever hear starts at 8:00 p.m., with the singing contest itself beginning just before 9:00, and featuring 6 to 8 singers. Cover charge is just $5, and Mozambique serves happy hour all night long. To date, the audience has voted for its 1st and 2nd placers, with the prized two going home with cash prizes.

I know, I know. When Ivan Spiers insisted that I take a look, I couldn’t believe I was thinking of staying out until 10:00 p.m. on a Tuesday night. (How pathetic is that?) But since my first Laguna Voice experience, I can’t NOT go see this thing. At Feb 7th’s performance (it was on hiatus for Valentine’s Day), the bar was packed with shiny, happy people, and the singing talent shook the veritable timbers.

Take a nap if you have to – this is just too good to miss.

How Laguna Voice Began to Warble

A couple months ago, Mozambique’s Tuesday night wonder, musician Francois Dean, approached Ivan Spiers about starting a ‘real” singing contest and calling it Laguna Voice. As Mozambique was heading into the quieter winter months, Ivan thought it might be a great way to bring people in on Tuesday nights to his second-level bar, The Shebeen Room.

Little did he know … and little did any of us suspect that Laguna Voice would quickly become a serious singing contest with really serious talent.

For Singers, It Starts at MozambiqueOC.com/SingToWin

Tuesday after Tuesday, the crowds get bigger and the singing talent gets more amazing. Initially, I attended when Laguna Voice was in its infancy – about five weeks in – and was surprised that the “warm up crew,” Francois Dean & Friends, is one of the most talented live music ensembles I’ve heard in years. I’ve brought friends with me who are in longtime bands, and they’re delighted at how great this music is.

Francois Dean & Friends play for about 45 minutes, and then breaks for a few minutes to organize their singing troops before the real event begins. At first, singers would just walk in and ask to sing. By about the 10-week mark, there were 12 or 14 people showing up each Tuesday night, and there was absolutely no way to accommodate all of them on stage.

So, Laguna Voice took yet another step toward Voice-like professional status by only accepting applications online at MozambiqueOC.com/SingToWin.

Once scheduled, singers have to show up in advance to rehearse with the musicians. And they’re not allowed to read lyrics from any device – if they don’t know the song by heart, they can’t perform. Lastly, only when a confirmed artist doesn’t show is a walk-up allowed on stage.

Top Placers Head Into a “Sing Off” at End of Month

Rather than shun great singing talent, the vetting process just amplified the interest. Top-level singers have begun to descend regularly from L.A., Palm Desert, San Diego and even out-of-state places such as Colorado and Arizona. And, now that singers know when they’re scheduled to perform, they rally their friends for an even larger support crew.

This month, the Mozambique team added a new fun twist.

All the first and second placers from the previous weeks of that month are invited back to perform against each other in a head to head finale. Cash stakes are higher and pro judges will be in play to assure neutrality (some singers bring a LOT of fans, ha).

Get that nap in. Come on down this coming Tuesday, Feb. 21st, and vote for the last two singers allowed in for the “Sing Off” the following week.

To see some of the singing talent, check out Mozambique’s You Tube channel. As it’s a newbie, you’ll have to go to YouTube and simply search: Mozmabique OC Live.

See you next Tuesday!