Did you miss your trip to Tuscany this year? I have a solution for you.

Three years ago, a friend introduced me to Brian Gendece. My friend was a giant foodie fan, and Brian had recently retired with the idea to expand his cooking hobby as “The Showbiz Chef.”

Brian and I hit it off like age-old friends. Brian had been a long-time talent agent for Broadway and Hollywood, and we’ve had plenty of masterminding sessions that span the gamut of topics.

Several weeks ago, Brian’s first documentary on Tuscany, “Tuscany Beyond Expectations,” went live on Amazon Prime. Anyone who knows Brian knows that this is hardly a surprise. This guy lives at such a high frequency of life that he chews and digests big goals for breakfast, lunch and dinner. 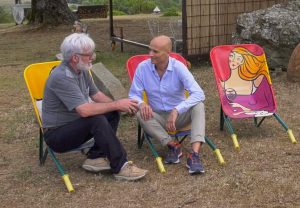 The filmmaker, Brian Gendece, right, chats with Brunello Vintner Annibale as they sit in wheelbarrows that Annibale hand-painted.

After a truly chaotic week last, I flumped myself down on my couch last Friday evening to watch Brian’s show. I was so exhausted. Moments later, though, that I was mesmerized. In just the opening sequence, I felt my blood pressure drop.

“See Tuscany Through Our Eyes.”

The last time I met Brian for lunch, he was days away from leaving for Tuscany for this very trip. Out of the blue, Brian received a message on Facebook from a complete stranger in Italy (Roberto Bechi, an accomplished tour guide), whose note read:  “Would you like to see Tuscany through my eyes?”  Having just been through a personal loss, Brian simply shrugged, purchased plane tickets and started researching film cameras.

“I didn’t have a plan or a script or a story. I didn’t know a thing about my host,” said Brian. “I just decided to be present and see what happens.”

He wasn’t disappointed. The morning after his arrival, Brian was right in the middle of the annual wine barrel races between eight historical neighborhoods of Montepulciano.

From there it was interviews with the 90-year-old famed godfather of suit-making, hanging out with wine-making families, preparing dinner with a Michelin-starred chef, and more. 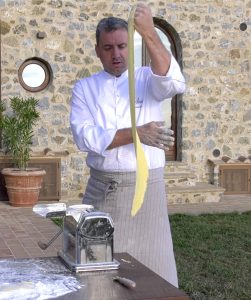 Preparing dinner with a Michelin-starred chef

My favorite had to do with Vintner Annibale Parisi, one of the better-known Brunello di Montalcino creators who releases just 5,000 bottles a year. I’ve never observed a man more passionate about his craft.

A Different Time and Pace

Brian’s stories roll on as these short vignettes tell a tale of a world that lives far from chaos, bustle and stress.

It brought back memories of my own solo travels to Italy when I simply trusted strangers to pick me up at a tiny train stop, insert me in their Michelin kitchen for a “hands on” cooking school, and buzz me around in the afternoons (in a really tiny Fiat) to similar meetings of uncommonly memorable people.

Brian’s filming is impeccable; he weaves each story beautifully. My only complaint is that the entire documentary is just 30 minutes long!

As the 90-year old tailor reminds us in the film, “These people give you threads. It’s up to you to weave these threads into something beautiful for your life.” Thanks to Brian, the rich result adds beauty to all of our lives, just when we need it most. 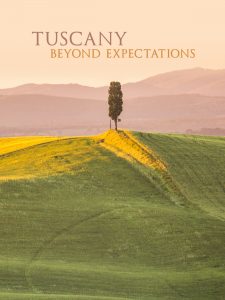 Tuscany Beyond Expectations is currently on Amazon Prime

Take a few moments to watch, Tuscany Beyond Expectations on Amazon Prime, and please leave your ratings. You can also join me in following Brian’s fabulous rustic-to-decadent cooking on Facebook at @theshowbizchef and on his YouTube channel, Brian Gendece.

P.S. To learn more about Brian Gendece, “The Showbiz Chef,” click to my other article here (his food photos were too great to stuff at the bottom of this post!)