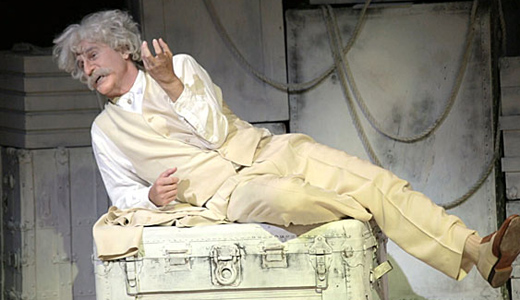 Suffice to say that every talent that stands on the stage at the venerable Laguna Playhouse is a powerhouse talent. On Nov. 21st, we’re all in for a real treat with film star Val Kilmer in a 4-evening run of “Citizen Twain.”

This one-man show explores Twain’s wry commentary, wit and wisdom, and critics everywhere say that Kilmer is “channeling” the dear man himself. Kilmer constructed the play  as a stand-up comedy act, but reminds audience members that Mark Twain was a “radical, social commentary giant.” Each performance ends with a Q-and-A session while Kilmer removes Twain’s makeup on stage.

Most tickets for this event are already sold out, but the Laguna Playhouse is accepting ticket orders through phone only at (949) 497-ARTS (2787).

Never in the Hollywood limelight, and content for years on his ranch in New Mexico, this rather reclusive actor is certainly worth a rare personal appearance in Laguna Beach. Most tickets for this event are already sold out, but the Laguna Playhouse is accepting ticket orders through phone only at (949) 497-ARTS (2787).