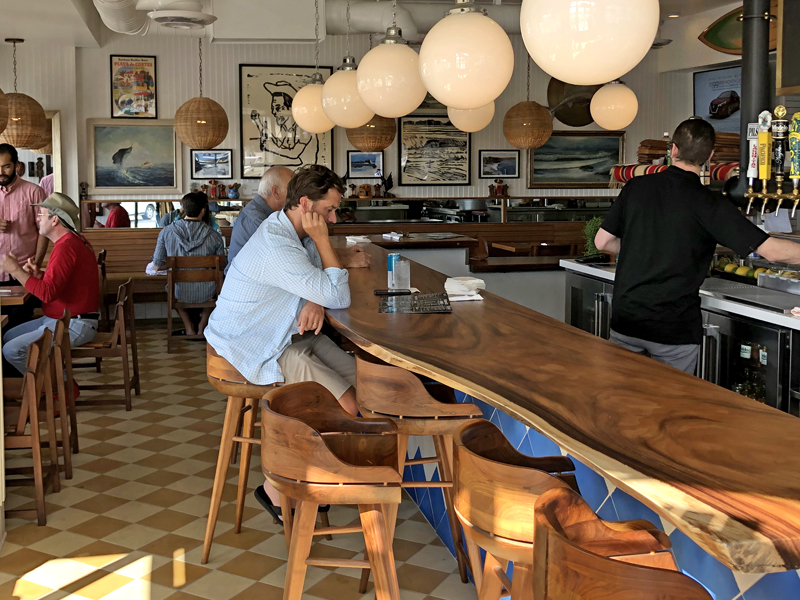 Interestingly, the opening was 362 days from the day the City of Laguna Beach granted the company access to begin renovating that space. “It’s definitely been a long time coming,” said Bear Flag’s Operations Manager Joe Klooster. “I guess you could say it makes the victory of opening that much sweeter.”

The renovation proved a stem-to-stern change up, from grease traps to kitchen, and outdoor signage to booth cushions.

“Our owner, Tom (Carson), grew up in Newport Beach and he’s always had a soft spot in his heart for Laguna,” added Klooster. “So, it might have been a longer wait than we had hoped, but it was all worth it. We’re here for the long haul and are embracing Laguna as our community. We love it here,” he said.

While unique in its shiny new look, Wild Taco is serving up the same popular menu its older sister first introduced in Newport Beach. 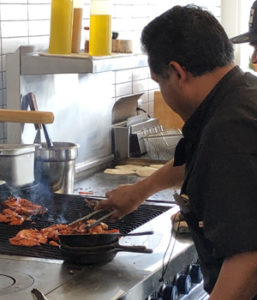 Carson initially developed the Wild Taco concept as an alternative to fast food, especially for kids. He and business partner Scott Breneman own fishing boats that almost daily ply our coastal waters, ensuring a super-fresh catch, a sort of sea-to-table kind of concept. The restaurant also serves grass-fed beef, chicken and pork.

Business as Usual, Right From the Start

In its third full day of business, I popped in as soon as the doors opened.

As a rule, I say it’s never proper to judge a restaurant’s fare in its first three weeks of business. No matter how many eons of experience they may have under their belts, a new restaurant “infant” is a personality all its own, and it takes a bit of time to settle everyone into a familiar routine.

This “rule of thumb” didn’t seem to matter at Wild Taco. The staff was friendly, the managers talkative, the drinks frosty and cold and the food quite delectable. Given that they’ve been fairly pounded with business from each day’s opening bell, they are handling their crowds with uncanny grace.

Breakfast items on the menu are not being served yet. Klooster figures they might need a month or two to feel firmly situated before adding it in. There are, however, plenty of options to choose from. Small bites range from their best-seller, (oddly) Chips, Guac and Salsa, to Shrimp Cocktail, Mini Quesadillas and Oysters on the Half Shell. I decide to dive into the deep end with a Diablo BBQ Oyster for starters. It arrives grilled and nestled down in its own tiny pond of housemade Diablo sauce. The Diablo starts on a friendly note and warms to quite a crescendo. Fair warning to those readers who prefer “mild” salsa, but if you like the heat, this is the kitchen of your dreams.

The three-page menu boasts salads, Baja bowls and a variety of crafty burritos and nacho towers. I mosey past the enchiladas and a vast assortment of mix-and-match taco combos to land on the skillet dishes.

I’ll eat anything in a skillet – breakfast, lunch and dinner. I’ll even order a dessert if it’s in a skillet. It’s an affinity I can only track to a possible past life as a rancher out on the plain; I don’t know why I love skillets. As far as I’m concerned, nothing goes wrong in a skillet.

My hopeless adoration is proven correct once again. 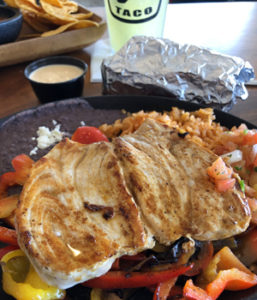 In just minutes, I’m served the Swordfish Skillet, tiny tendrils of steam still rising from the freshly grilled piece. It’s a large cut that fairly blankets the Spanish rice and grilled peppers below. A hearty dollop of black refried beans edges its way onto the skillet, while the Super Secret dippin’ sauce and street taco-sized flour tortillas can’t even find room. They settle for the table next to the skillet.

True to rumor, this is super-fresh fish. It’s perfectly grilled and seasoned, and I munch through almost half of the hearty fish serving before I remember that I can make street tacos with it, too. Street taco assemblage is the only art-and-craft project I’ve ever excelled at, so I’m happily busy for several more minutes.

Margaritas of a Saké Kind

For the time being, Wild Taco serves up wine and beer. This, however, does not stop them from making inventive sangrias and mimosas, as well as margaritas made with Sabé, an infused saké. Laguna local and New Manager Chad Abell tends bar while his servers tend to the crowds, and it’s a never ending pour of draft beers, mimosas and the sake´ margs. 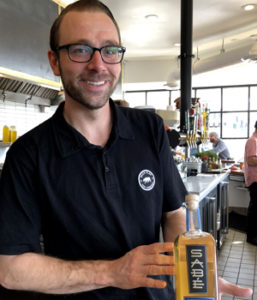 Within 25 minutes of the restaurant’s opening, the 49 seats filled around me. I recognize a few locals, and both Abell and Klooster say they’ve met more locals than tourists in their 3-day run. “It’s great to see the locals’ interest in our place and they’ve been very supportive,” said Klooster. “With our Bear Flag concept planned for the other side of Laguna, we’re really looking forward to a longtime, healthy relationship with the residents of Laguna Beach,” he said.