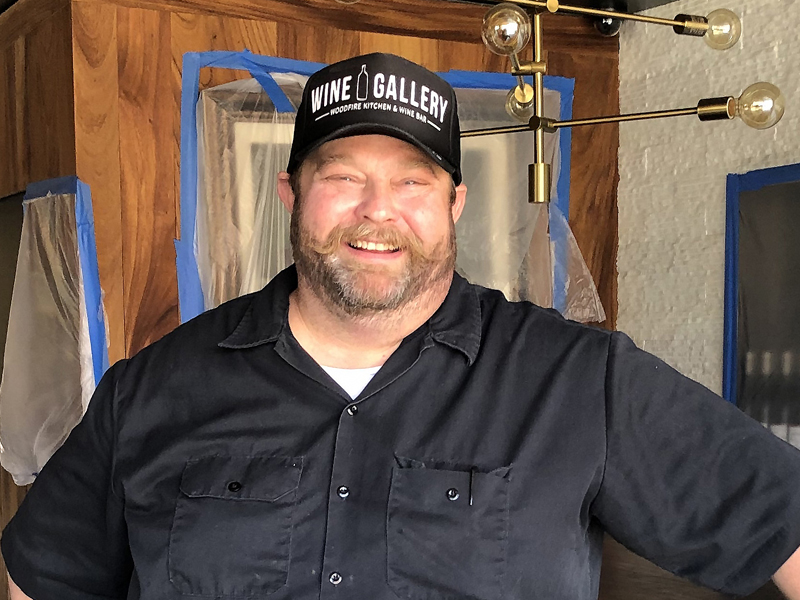 For years now, I’ve been extolling the cooking virtues of Chef Josh at our locals’ favorite Wine Gallery. While most folks are more than happy to partake in his wings or various creatives pizzas, I always like to try something from the “real” menu of entrées every time I visit. His food is such a great treat!

This Tuesday, I popped into Wine Gallery to meet one of my dear buddies, Ali North, from nearby Surf and Sand Resort. We opted for the courtyard patio just behind the restaurant, though the restaurant is now open to 25% capacity inside.

Business partners Chris Olsen and Paul Spiegelman have toed the line on following the safest protocols since our COVID outbreak, and there’s no exception here with the latest indoor seating protocols. The menus are also available via QR code scan to your phone. 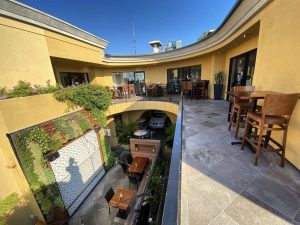 In March, Chris and Paul took on a leadership role with a handful of other Laguna Beach restaurateurs, establishing an alliance that worked in weekly mastermind and idea swapping. Thanks to their efforts, and with help from the City and – particularly – City Councilmember Sue Kempf, restaurants throughout Laguna Beach received “TUPs” (Temporary Use Permits) to expand their outdoor seating options.

Wine Gallery was not only able to snake its way onto larger patio space on its first-floor courtyard, but also add seating to the second level hallways above. As a plus, most of that seating has awesome ocean views.

As Chris chatted with us, he told me that the TUPs are set to expire at the end of October.

“These permits were our saving grace this summer,” Chris said. “With the weather as great as it is, I’m hoping the City will be willing to expand our TUPs past October. There are still so many people who just feel better about dining outside, and it’s created a real “Euro-feel” with all these sidewalk cafes,” he added.

Two Little Known Entrées You Have to Try

Foregoing the usual appetizers and salads, we opted to start and end with entrées. Apparently influenced by the “Euro-feel” comment from Chris, I chose Steak Frites.

Everyone I know who’s traveled somewhere in France (including me) has a great Steak Frites story. I first tried Steak Frites in Paris, and then became an ardent fan of the same dish at Mon Ami Gabi at the Las Vegas’ Paris Hotel. Every few weeks, when I’d visit my Michelin-starred French cuisine restaurant clients, I’d try to make a casual lunch stop for myself on that restaurant’s cafe patio facing the Bellagio fountains. Because I try to reserve both steak and french fries to an “occasional” treat, Steak Frites does a lovely job of solving both hankerings. 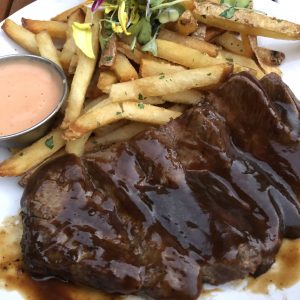 Chef Josh’s version is no exception. The 8-ounce flat iron steak is perfectly seared with a dollop of classic demi glaze, and the fries are fresh and cooked to perfection with just a hint of herbs and salt.

Ali opted for Calabrian Shrimp, so named for the famed Calabrian hot chili pepper paste that originated in Italy’s toe-of-the-boot town, Calabria. The dish lived up to its name, a spicy and hearty meld of jumbo shrimp, roasted peppers and seared tomato in a truly splendid sauce.

Of course, our server suggested lovely wine companions for each dish. Years ago, Chris originally created Wine Gallery as a retail hub for great wines. He started in Corona del Mar, eventually expanding to “light bites,” and then a larger menu, and then another restaurant in Laguna Beach altogether. A few years ago, he closed the CdM location to focus his efforts on his own hometown, and Chef Josh circled back to join him once again in the kitchen.

Although Chris’ business plan has markedly changed over time, he still serves up some of the rarest finds and offers more than 25 wines by the glass on a daily basis. 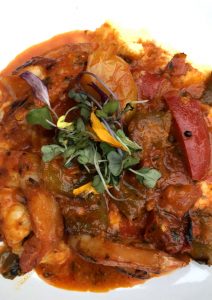 In the initial weeks of COVID when Wine Gallery chose to close its doors, Chris kept very busy delivering bottles of wine to Laguna neighbors. The restaurant continues to provide its entire menu and wine menu on a “to go” basis.

Truly one of the friendliest local “watering holes,” Wine Gallery is a stellar treat every time I mosey my way there. The restaurant recently closed for Monday nights, but is open the remaining six nights of the week at 4:30 p.m. Wine Gallery is at 1833 S. Coast Highway, #110, just below our local radio station, KX FM Radio.