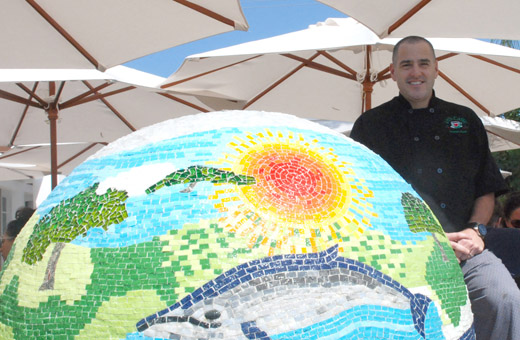 There’s some serious bustling going on at Urth Caffé.

Our newest restaurant to join the Laguna Beach culinary throng, Urth Caffé finally threw open its doors to the public last Sunday, doling food and drink to about 5,000 people.

As I sat down with Chef Andrew mid-week, I half expected to see a lull in traffic, but the throng continued, waiting patiently in a snaking line as the mid-day sun beat down.

Enormously successful in L.A., the Urth Caffé here in Laguna Beach has doubled its menu size, offering nearly 40 breakfast items that are as new to the Urth chefs and line cooks as they are to the public.

“We wanted to pay homage to The Cottage,” says Chef Andrew. “It had been such an iconic presence for so many years that it just seemed the right thing to offer classic egg dishes, pancakes and French toast … with an Urth twist.”

The “Urth twist” is more like a conga line of innovation and taste. 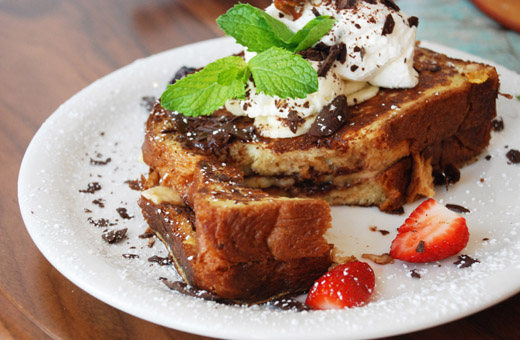 Take, for instance, the Stuffed French Toast with house made brioche bread stuffed with fresh banana slices and Nutella spread. It’s griddled and served with whipped cream, pure maple syrup and chocolate shavings (of course). It’s decadent craziness, and already one of the most popular sellers.

“We’ve always served omelets and quiches, but the egg dishes have been a learning curve for all of us in the kitchen,” says Chef.

“Once the rest of the dish is ready to go, we cook the eggs in a small, individual pan so that they’re nice and hot and perfect going out to the diner,” Chef Andrew continues. “So, that’s taken some adjustment in our line.

From the “just eggs” lineup, I choose the Poach Di Parma dish, which, translated, means “hands down best tasting poached eggs I’ve had in a long time.” 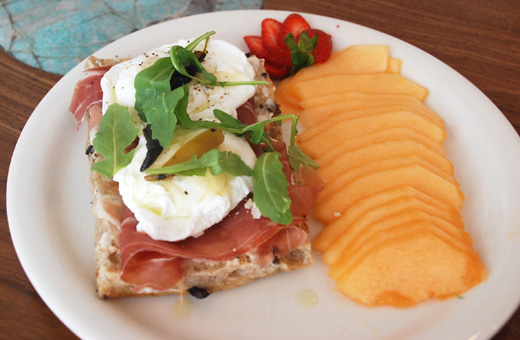 Chef Andrew starts with toasted, freshly baked ciabatta, slathers it in garlic truffle aioli, and then loads it with sautéed wild mushrooms, prosciutto di Parma, two soft poached eggs and wild arugula. He sprinkles with Reggiano Parmesan and dabs sage butter to finish the masterpiece. I’m not sure how he’s dreamed up the classic savory flavor of wild mushrooms with the salty prosciutto, peppery arugula and perfectly poached eggs, but the dish requires no additional seasoning. If it’s indicative of the six “just” egg dishes on the Urth menu, we’re all in for a sublime treat (and repeat visits!).

Planet Urth: An Abundance in Creations

When the first Urth Caffé initiative began about five years ago, Chef Andrew was hired by Owners Shallom and Jilla Berkman. Initially a chef and menu concept developer for the Cheesecake Factory, Chef Andrew went on to develop 200 menu items for his own successful restaurants, Old Hickory Grill, in Washington, D.C., Maryland and Virginia.

“I just reached the point where I couldn’t stand the cold winters anymore, so I up-and-moved my family to San Diego.”

The Urth Caffé concept – organic with a predisposition to vegetarian dishes – was as different in concept from Chef’s BBQ restaurants as the climate change from east to west. The menu began easily enough with organic coffee, tea and beautifully baked goods. (Chef Andrew starts our meeting by ordering me an iced Spanish Latte. It arrives in a tall glass, its foam artfully finished and a rabble of espresso-flavored bobas working their way up my jumbo-sized straw.)

With Chef Andrew’s proclivity for vast numbers of menu items, it wasn’t long before sandwiches, burgers, salads and paninis made the scene.

The entire lunch menu (another 50-60 different dishes) has moved in full to Urth Laguna Beach, and it’s a rambunctious number of offerings that include anything from the famed Urth Pot Roast Sandwich to Nicoise Salad, Vegetarian Lasagne and Grilled Veggies with Pesto, Hummus and Tabouli. 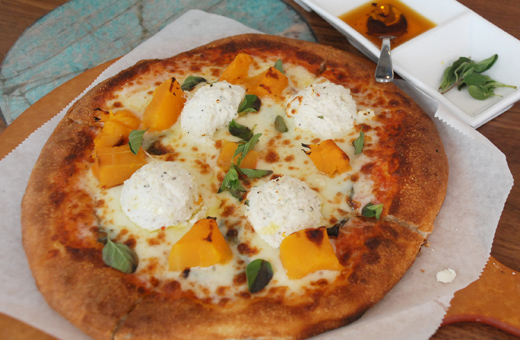 For the lunching side of things, Chef Andrew trots out a gorgeous Butternut Squash & Ricotta Pizza to try. Bite-size chunks of savory squash cozy their way between mounds of fresh, melt-in-your-mouth herbed ricotta cheese. Tomatoes, mozzarella and dashes of fresh oregano create a lovely, mild mannered pizza with simple tastes that individually pop. With the pizza’s arrival is a mini-tray of extra Parmesan cheese, more fresh oregano and sublime chili oil made fresh in Urth’s kitchen.

The Urth on Everyone’s Radar

Two hours later, I’m departing Urth Caffé and the snaking line still exists, at least 20 people strong. Those dining at Urth cover the demographic gamut, from teens to new moms, and from business associates to lively seniors. A chatty, happy vibrancy has returned at this corner of North Laguna Beach, and I’m willing to bet that this “planet” of great food and easy conversation will be in every local resident and visitor’s orbit for many years to come.