Yet Another Anniversary of Max Caputo’s Death 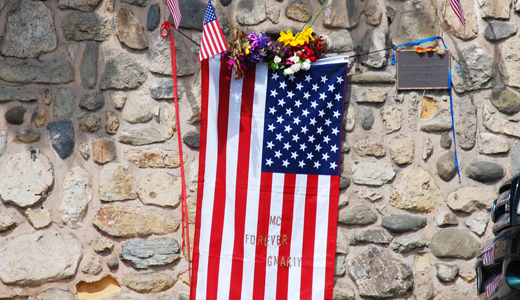 Every year since 2010, I’ve run this story on Max Caputo. He was the skimboard kid that everyone adored. He was killed in a hit-and-run accident on August 19, 2005, on PCH in Laguna Beach.

Every year, his family and friends put up a memorial on the wall on PCH where his death occurred. This year, it’s a mural of flags next to the bronze plaque memorializing his life.

And every year, we all hope in the year to follow that someone with the right information will come forward with the information Max – and his family – deserves.

From my original article:

When I first moved from main Laguna Beach to South Laguna Beach in 2005, I didn’t know a thing about the tight-knit skimboarding and skate community. That changed on August 19, 2006 when 17-year-old Max Caputo was killed in a hit-and-run on PCH.

Having just assured his girlfriend via text that nothing would happen to him, Max set off on his bike in Saturday’s early morning hours. He was two blocks from his house when he was hit from behind and died at the scene. The driver fled.

The driver fled. Can you believe that?

Max’s death absolutely rocked the Laguna skim/skate world. Memorials to Max were neatly painted on the stairs at 1000 Steps, Table Rock, West Street and Victoria Beach where Max had skimmed for years of his life. I remember running these stairs for months, seeing Max’s name and that he was missed.

At the site of his death near Upland Street and PCH, an elaborate memorial grew and grew and grew. While most roadside memorials might last a couple weeks or a couple months, this memorial has remained for five long YEARS. It is an ever-changing beautiful testament to Max, the family that raised him, and the commitment of many, many friends who will not let the circumstances of Max’s death be forgotten – a hundred or so of them even gathered at a day-long beach event to celebrate his 18th birthday. I wouldn’t be surprised if they continue the tradition to this day.

Now that I’ve been photographing the skimboarders for several years, I know that, even as they age and carry on with their lives, these guys and girls will never let Max go. Even today, ask any skimboarder at West Street what they remember most about Max Caputo, and they’ll talk and talk and talk. It’s as if Max left just yesterday for a quick family vacation; his memory is that significant and sharp in their minds.

While the memorial near Upland Street and PCH has quieted over the last year, it was in full bloom again this last weekend, honoring Max Caputo and mourning his death, now 5 years past.

Because Max was killed at such a quiet hour (around 3:00 a.m), the Laguna Police were only able to field a handful of tips from motorists who were first on the scene or passing on the other side. Nothing panned out. Auto paint chips were recovered at the scene – fragments they’re quite sure belong to the hit-and-run driver – and, as technology continues to advance at both state and federal levels, the Laguna Police have every hope and expectation that the vehicle’s make and model will be identified.

Rewards were posted immediately by Max’s family, then upped an additional $19,000 by parents and teens in Laguna Beach. Four months later, the producers of the then-filming reality TV show “Laguna Beach” added another $10,000 to the reward for information leading to an arrest. Still, nothing has panned out.

Posters asking for information about Max’s death were posted from Corona Del Mar through San Clemente and remained in place for several years (in fact, you’ll be surprised how many you still see in place, actually.) Still, nothing.

While some may call this a “cold case,” Laguna detectives continue to pore over the case, even to this day, searching for a new angle, looking for new leads. Someone out there is living with the knowledge that he or she snuffed the life from a well-loved teenage kid. And, it’s likely that someone else knows who that someone is. “A lot of times it only takes one tip,” says Laguna Beach’s Sgt. Rahaeuser.

And Max, my dear – I’m sorry I missed knowing you.