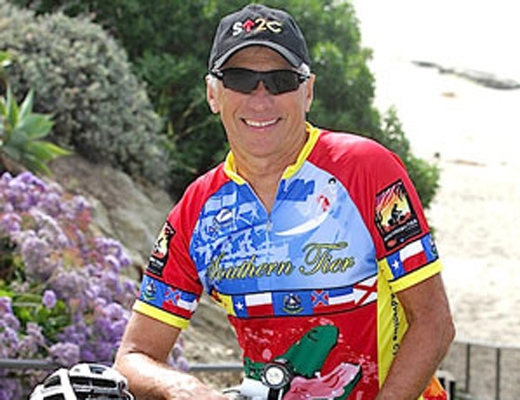 “After last year’s birthday, I started thinking about what I wanted to do for my 70th, he says. “I didn’t want a big party, and I didn’t feel like sitting at a resort somewhere, and then I knew what it had to be …”

On April 6, just three days after his 70th, Mick Dunoff is riding his bicycle from Laguna Beach to St. Augustine, Florida … because that’s what most men want to scratch off their bucket list at 70.

It’s not just his bucket list, though. After seeing many close friends and family members die or suffer from cancer, he’s raising funds with every mile he rides for the charity, Stand Up 2 Cancer. “I think it’s time I stepped up and did something significant with my life to help other people,” says Mick.

In February, after making his decision for the 3,069-mile trek, Mick set a goal to raise $10,000 for the charity. Stand Up 2 Cancer was co-founded in 2008 by Katie Couric, and gives every penny raised to innovative research teams and scientists who are working on various cancer projects. Mick will be riding under the Ride America 4 Cancer (RAM4C) banner, which creates rides everywhere to help this charitable cause.

When Mick first made his trans-continental tour announcement to friends, he expected some backlash. “First of all, I’ve never asked my friends for money. And, I figured they would be more interested in talking me off the ledge,” he says.

“But this big circle of supportive people just keeps growing, and the generosity is really unbelievable.”

See Mick off on Sunday, April 6 at Heisler

At 9 a.m. on Sunday, April 6, anyone and everyone is invited to Mick’s “Send Off Birthday Breakfast” at the picnic tables in Heisler Park. He’s asking that people kindly RSVP to his email address or phone number so that enough food is provided for all. Beyond that, though, he’s just asking for money contributions, either by check or through the online Stand Up 2 Cancer “file” reserved in his name. (Find all the details at the end.)

The April 6 Heisler fountainhead is actually part of a larger, organized tour through the Adventure Cycling organization. On that same day, hundreds of cyclists will be leaving San Diego to trek the Southern Tier Route, which meanders through Tempe and Las Cruces, beelines through El Paso and Austin, then trips to Baton Rouge, through Biloxi and the Florida Panhandle, and finally deadheads for St. Augustine.

“It’s perfect that it ends in St. Augustine,” says Mick. “That’s where Ponce de Leon claimed he discovered the Fountain of Youth. I figure I’ll be needing it right about then.”

Pedaling Into the Heart of Americana

Riders can choose to stay in “packs” or take off on their own. No surprise here – Mick wants to do this on his own, even leaving his usual support crew – Sharon, his wife – in California.

“I figure I can cover about 100 miles a day, but I’m not in a hurry,” he says. For Mick, this is an opportunity to do what he loves to do most – meet people from all walks of life. He loves talking to people and learning about their lives. He says his wife considered driving a support crew van, but finally admitted that she didn’t want to be waiting seven hours at a pre-arranged stop, wondering if he’d been mushed on the road when, instead, he’d probably found a pump jockey to converse with at some “rickety gas station.”

“I can’t help it,” he says with a chuckle. “People are fascinating to me. This is my chance to go at my own pace, and stop and talk whenever I feel like it. I get to be a part of Americana, and that’s something I’m looking forward to.”

For weeks, Mick has been laying out his packs for the ride, testing weight and balance with the bike’s custom saddlebags. Because this is a particularly demanding trek, Mick is leaving his lighter carbon bike behind. This time, for nearly three months, his steel frame bike will be keeping him company. The bike weighs about 36 pounds. Mick weighs about 168 pounds, so total weight should be about 230-240 pounds.

Tucked, rolled and stuffed into the compact bags are his lightweight sleeping bag and tent, a couple changes of clothes, his bike’s toolkit, his GoPro camera, iPad and iPhone and – most important – his iPhone speaker, attached to the handlebars.

“I listen to anything from classical to country … and electronica for the hills.”

He’ll stop in Austin for a few days to meet his wife; she’s bringing his “warm weather” clothes to exchange. “Getting through West Texas will probably be the most challenging because there’s not a lot out there … except a lot of wind. So, I figured I’d reward myself after making it through that hurdle.”

An Addiction to Uber

Although he is 70, and though he’s never done a trans-continental trek before, Mick is no stranger to the world of “ultra racing.”

Mick began running marathons at the age of 34 and, after 30 marathons, decided to boost the mileage count by taking on 50k runs (31 miles). Tiring of that, he upped it again, completing his first 100-mile run at the age of 44. At that point, he was hooked, and participated as an “ultra-runner” in many acclaimed 100-mile races across North America.

“If you want to get better as a runner, road biking is the thing that gives you the stamina and strength,” says Mick. “So, since I was already doing 80 and 90-mile days on my bike to train for these things, I decided to try ‘ultra-mountain biking,’ too.”

Through his 50s and 60s, Mick participated in 12 ultra races, some five and six days in duration, covering 500 or more miles. “I had nine finishes of 12 races,” he says. “But I’m most proud of the record I still hold in the Leadville race. I made it five miles before my bike broke. They still have a plaque in my name for that amazing feat.”

“I was fortunate to be a teacher for 38 years, so it gave me the freedom to train and go do” says Mick. “And you know, you always have to come back with a story on what you did for your summer vacation.”

Oddly, the man with endless wanderlust loves his roots. He and his wife have been Laguna Beach residents (in the same house) since 1976, and he demonstrated the same “roots” preference in his occupation, too. He taught computer science and history, and coached track and cross-country at Mission Viejo High School for 25 of his 38 years. He was voted “Teacher of the Year” before announcing his decision to retire. “You always want to go out when you’re on top,” he says with a wide grin.

Not recognizing that he’s already made a difference in so many lives, he talks of his surprise at former students – some of them in their 40s now – who have seen his Facebook entries and have freely donated money and encouragement.

“I think this is all going to work out,” he says. “And then I’m probably going to do a bigger trip. I’ve been thinking of Canada to the tip of South America …”

To make a tax-deductible donation for Mick Donoff’s ride:

Make checks out to SU2C, please reference TEAM RAM4C. Bring the check to the April 6 breakfast, or mail it to Mick Dunoff directly. Email  brsmts@yahoo.com for details.

Or, go online to  www.StandUp2Cancer.org – the search is so convoluted for your specific donation for Mick Dunoff that we’re providing the shortened link directly to Mick’s page here: http://bit.ly/1hgKPYP