A Manhattan Legacy Comes to Life in SoLag’s “The Drake” 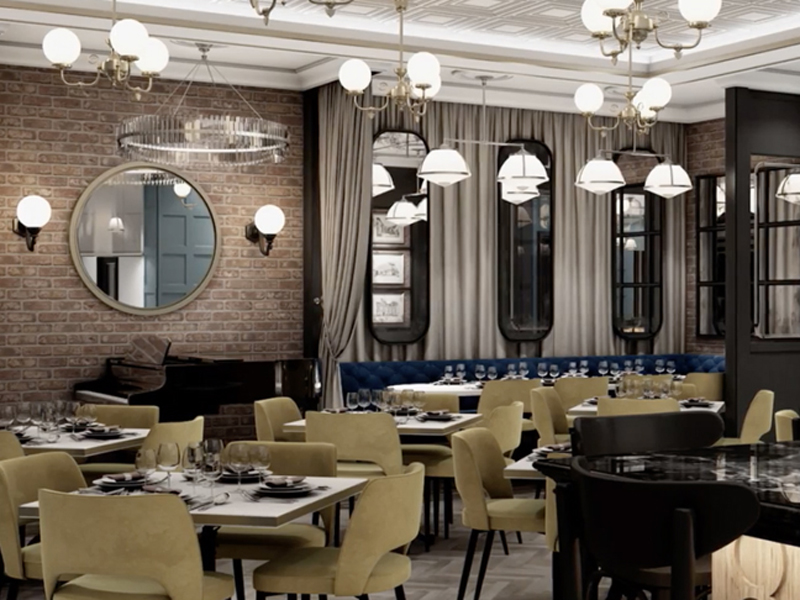 When he was a teenager, Alec Glasser spent three summers working at the Drake Hotel in Midtown Manhattan. Because his family didn’t want him traveling back and forth each day to their home in Queens, they negotiated a sweet deal: He was allowed to live at the hotel. It was three summers more than 40 years ago, but The Drake left a lasting impression on the teenager, even after it was demolished in 1987.

“When you walked in the Drake lobby, there was a dining room on one side with wonderful blues piano players, and on the other side, a club called Shepheard’s that was always rocking with blues and R&B,” says Glasser.

“I grew up in that hotel. It was the essence of hospitality, a collaboration of great food and great music,” he adds.

Fast forward to August 2019, and we find Glasser working to bring The Drake experience back to life in the old Tabu Grill space. He and his team are just weeks away from opening their new restaurant, The Drake Laguna Beach.

Fast Work to be Done in 3 Weeks 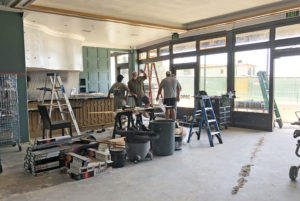 While the space is beginning to take shape, there is still a great deal of work to be done. We walk on concrete floors, stepping around leaning ladders and piles of lumber, but Glasser doesn’t mind. In his eyes, he’s already looking at the immaculate finished product. He couldn’t be more buoyant.
When she’s completed, The Drake will be nothing short of “swank.”

After a 3-year approval and permitting process, The Drake expanded into the building’s end unit, which was a separate retail space next to the Tabu restaurant. From the outside, it doesn’t look like much of a gain. On the inside, however, it has added a surprisingly roomy bar/lounge that will – in three weeks – house a grand piano.

With a full liquor license, the lounge will prominently feature whiskeys, bourbons and scotches.

The dining room is stamped in the original Tabu footprint, including the L-shaped bar that will again allow patrons to watch the chefs complete and plate their dishes. The dining room will feature a stage for live music as well.

Both rooms, Glasser notes, were wired for state-of-the-art sound and video recording capacities from the start.

“This  restaurant is all about great chefs creating great food that plays in collaboration with high-level blues, jazz and R&B,” says Glasser. “It was important to get it right.” 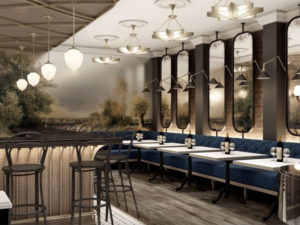 Entertainment is slated to begin in the lounge at about 6:30 p.m., with the musician’s live play projected to the large brick wall in the dining room. At about 9:00 p.m., live music switches to the dining room with live projection bouncing to the lounge’s brick wall.

I ask about meeting the chefs. Director of Operations Matthew Timmes points to two men scrubbing away at the newly installed windows. “We’re doing whatever it takes to get open,” says Chef Paul Gstrein. “We’re ready to cook!”

Small wonder at his impatience … Chef Paul has been on board since May 10th and thinking about The Drake’s menu ever since.

Most recently the chef of Bayside in Promontory Point, Chef Paul first arrived in Orange County in 1988 to helm the expansion of Bistango. The OC is quite a distance from Chef’s original culinary roots in Austria.

After growing up in a family-owned hotel and restaurant business (Chef refers to it as the town’s “hitching post”), he finished culinary school in Innsbruck and made a beeline for the States at the age of 21. He worked in several renowned chefs’ kitchens, including Charlie Trotter’s, Wolfgang Puck’s, Bradley Ogden’s and Mark Peel’s before eventually landing at Bistango in Los Angeles in 1985, the restaurant that would eventually lead to Chef Paul’s new kitchen in South Laguna Beach.

All in the Family

To co-helm The Drake, Chef Paul turned to the chef he trusted most – his son, Nick Gstrein. As the family line goes, Nick also grew up in his father’s kitchen in the L.A.-based Bistango. “I used to ramble around the Bistango kitchen in L.A. when I was just a toddler,” he says, pointing to a tiny scar he inherited when he “wandered” too close to a hot range.

The two give me the 20-second tour of the tiny kitchen and show off the new, small room they’ve gained for their cold storage. Even with this new space as a result of the added bar expansion, I wonder how they managed to move all these giant pieces into place – there is simply not an inch to spare. 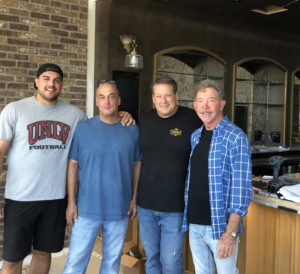 Then, we get to the meat of the matter: the menu. Glasser has described it as a ‘Chicago vibe with a Southern California twist.’

“We’re primarily going with smaller dishes so that people can order a few and share,” says Chef Nick. “And, then, we have a few larger items that are designed for sharing, too,” he adds. He gives me 20 seconds to look at The Drake menu on his iPhone and snatches it away with a grin. It’s a fun, inviting menu with small plate items such as Hamachi Tartare and Short Rib Ragu giving way to three large shareables that include a 32-ounce Bone-in Ribeye. The Venison Diane entrée is a nod to the Steak Diane originally invented by the Drake in New York.

“I’m Austrian,” says Chef Paul. “We do venison really well!”
Rather than presenting composed plates, the chefs will offer a number of sides (i.e., polenta, cauliflower, risotto, etc.). “Our menu isn’t a formal affair,” says Chef Paul. “We designed these dishes to partner with the energy and flow of the live music. It really is about the collaboration of the two.”