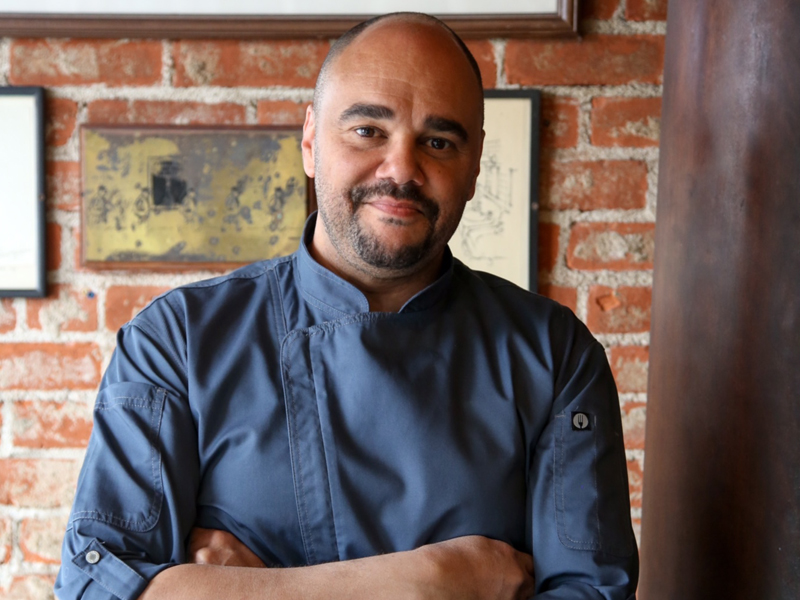 Today (Wednesday), ROUX partner Michael Byrne, announced that the ROUX space will be temporarily closed and that a “new concept” restaurant hopes to be re-opening soon. The remaining partners of the LLC-based entity, Laguna Eats, removed ROUX Sous Chef Tyler Nix today. Tyler, already a very experienced sous chef, was hired and trained by Chef Theard, working side-by-side with the Chef from their opening day.

The one-two punch  is a significant loss to Laguna Beach.

A rousing success in the dead of winter

From its first day, ROUX was an immediate and rocking success with Chef Norm cooking authentic Creole recipes passed down in his family for generations. The renovated space was a warm and sultry French Quarter beauty, from its New Orleans crafted iron accents to framed family photos on the walls and a friendly, inviting welcome from every staff member crossing your path.

Now, the family photos are gone, just bits of hook and wires hanging sadly from the walls. The family recipes – as well as the spice blends used with each dish – were proprietary to Chef Norm, leaving the popular restaurant with only a memory of the delectable catfish, crawfish étouffée, Shrimp Yvonne (named after his mother), and more.

“I really struggled against the thought of resigning and leaving ROUX – not because of my own money investment or time invested – but because we’ve created such a great family of employees, all of whom are counting on their paychecks, said Chef Theard. “I knew that if I were to leave, my employees might have to struggle with this possible closure.

“But, although we were profitable from our first month of operation, and, although we all loved our jobs and loved coming to work, I just couldn’t continue in the business relationship with my financial partners. It was a daily battle that took its toll on me,” he said.

“The most authentic Creole food outside of the French Quarter”

Greg and Terri Smith, two Laguna Beach locals who seek out “foodie experiences” around the country, became ROUX fans from its first week. Greg, known as a rare “Duke” on Yelp for his vast numbers of visits to favorite restaurants, clocked more than 15 visits to ROUX.

“ROUX’s entire concept and food is as authentic French Quarter as you’re going to get,” Greg said. “The friendliness of the staff and chefs, the open kitchen concept that allowed you to chat and interact with the chefs, and the passion Chef Norm had for creating this incredibly authentic Creole food … well, you just don’t get that anywhere outside of the French Quarter in New Orleans.

“Chef Norm could open ROUX right in the French Quarter and I’ve no doubt that his restaurant would easily be the most popular one in very short order,” added Smith. “He’s really that good at what he does.”

A rare and unique cuisine, ROUX Chef Norm Theard put his reputation on the line with food critics far and wide, and they responded with unadulterated enthusiasm and respect. As 2017 wound to a close, the largest accolades began rolling in, including The #1 New Restaurant in Los Angeles 2017 by CBS News, the #2 New Restaurant 2017 by Orange County Register’s Brad Johnson, and OC Weekly’s Top Restaurants of 2017, to name a few.

While Chef Norm certainly appreciated the high-brow awards, he points to Laguna Beach locals and patrons who drove for miles to dine at ROUX as his greatest reward.

“I positively love the community of Laguna Beach and the way they welcomed me and the ROUX team with open arms, ” said Theard. “In ROUX’s short lifespan, we’ve enjoyed getting to know our diehard regulars and making new friends. I’m really looking forward to creating the next endeavor and – hopefully – serving the community of Laguna Beach again. I hope, more than anything, we can find the right place, the right time and the right investors to make this happen,” he added.

Says Greg Smith, “I can’t wait to find out what Chef Norm’s new endeavor will be. No matter where it is, I’ll be the first one in line.”

Stay tuned for more details from me on ROUX’s future in StuNewsLaguna.com this Friday morning. Feel free to send any comments or questions to Diane@LagunaBeachBest.com