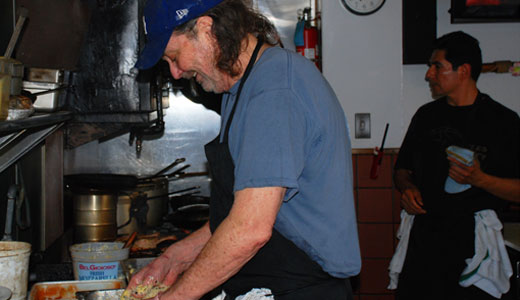 Definitely in my Top Four Restaurants of Laguna Beach, Café Zoolu is a wonder all its own. For starters, this restaurant is dinky. Owners Toni (hostess and main waitress) and Michael (head chef) Leech have managed 18 years in this tiny cottage with an offering of, maybe, 8 seats at the bar where Chef Michael cooks, and an allowance for about 25 diners at the tables.

Chef Michael has been at this 40 years, both in Hawaii and here on the mainland. This must be a case of “practice making perfect” because I’ll tell you here and now, this guy does not miss a beat on anything he produces.

Michael and Toni met while he was the Executive Chef at Five Crowns in Corona del Mar, and that, too, was a long, long time ago. She’s the edgy, funny, no-nonsense front man (Toni once made Barbra Streisand stand outside on the sidewalk in the rain because her handlers hadn’t made a reservation for Zoolu’s busy Valentine’s night). Michael, meanwhile, is the guy with his head down, turning out phenomenal dinners all the night long with his famous mesquite broiler relentlessly firing.

Michael calls his food “Cali-Polynesian” which, when pressed, he claims is a mix of Hawaiian, Asian, Mexican and Cajun influence. Let me say again very clearly: It doesn’t matter which national heritage you choose to make your plate at Zoolu’s … whatever you choose will have you waving its country’s national flag by evening’s end.

“Best in the World”

Anyone and everyone will tell you that Michael’s Baseball Swordfish (actually more the size of a softball) is the best in the world. Believe them. Michael makes a point of only ordering fresh, wild-caught fish and he butchers and cooks each selection himself.

If swordfish isn’t your game, there are plenty of other seafood and fish dishes on the menu, including other best-sellers Soft Shell Blue Crab, Alaskan Salmon and Laguna’s own Spiney Lobster in season (Oct – March). For lighter appetites, consider digging into the Ahi Nicoise salad or the Char-Broiled Scallop Salad (a “Taste of Maui” award winner). For me, I’ve never had Cioppino on Bouillabaisse like Café Zoolu’s anywhere in the world. This fresh seafood stew is packed, packed, packed with swordfish, ahi, mussels, clams, scallops and shrimp AND sits on a bed of pasta. It’s drama, man. And don’t even think of passing up the Calamari Asian Style for your appetizer.

If at least 9 different kinds of nightly fish just aren’t your game, have no fear. With the Zoolu Meatloaf actually able to rock your socks off, you know you can’t go wrong with Michael’s superb Filet Mignon (I’d vote this best in Laguna Beach), his Grilled Pork Chops, Osso Buco, or Penne Rigata. And that’s just for starters. The Café Zoolu menu is bigger than the restaurant itself.

I guess part of the charm of Café Zoolu is that it’s so far removed from being a well-run machine of a place. This is a real-life husband-and-wife team who make it happen five nights a week. They put roots down in Laguna Beach decades ago and they’re here to stay. In fact, before the Montage Resort broke ground in 2001, we locals remember that extensive stretch being Treasure Island, home to 268 trailers. Toni and Michael owned one such trailer and, after the Montage was built, they figured out that a couple bar stools at the far west end of the Montage Lobby Bar were in direct position over what used to be their living room. So, on just about every Tuesday evening, the couple sits in their “living room” to enjoy a couple drinks.

That, my friend, is what I love about Laguna Beach. Enjoy the spirit of Café Zoolu.