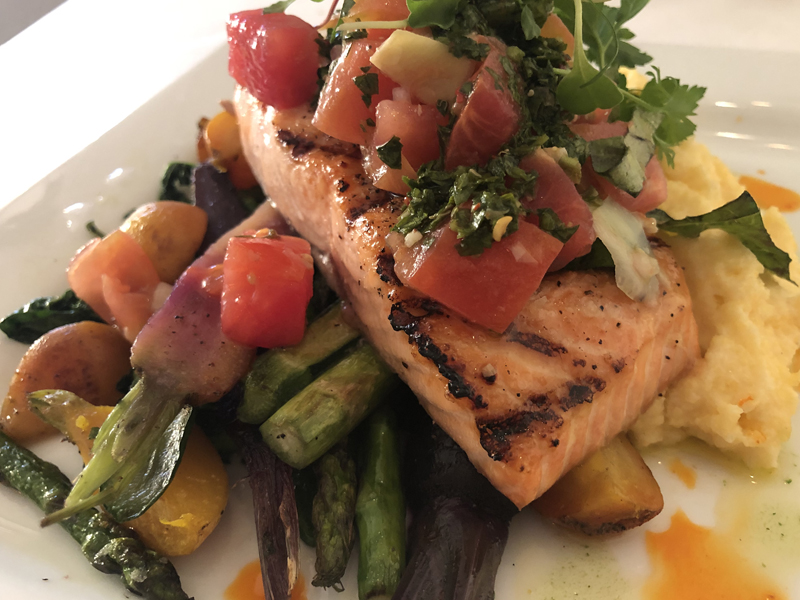 Fourteen years ago, I decided I’d make a hobby out of covering all the “best of Laguna Beach.” Initially, it was just a few lonely blogs that – just as the movie Julie & Julie reported – seemed to only attract my Mom’s attention and comments. Fast-forward 14 years and it’s become quite an entity that has surprised me more than anyone else. 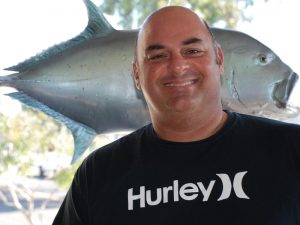 Popular Chef Craig Connole has taken over the kitchen at Ristorante Rumari.

The very first chef I asked to interview for my then-rocking 3-article blog was Chef Craig Connole of K’ya Bistro and Rooftop fame. He proved so easy going and interesting that he was the encouragement that led to my hundreds of chef and restaurateur interviews and food reviews.

While I spent my 14 years building out my blog and subsequent books, Chef Craig spent the same amount of time transforming two restaurants at the Casa del Camino Hotel into globally renowned eateries.

Despite changes in ownership and hotel management groups Chef Craig continued to turn out new culinary innovations, even introducing “small plates” in 2008 and 2009 when our economy took a dive. He and business partner, Chris Keller, were always ahead of the puck, quick to change, feint and scramble forward.

Now, the two have reunited at Chris Keller’s newest restaurant ownership, Ristorante Rumari, and a whole new game is in play! Over the years, Chef Craig would chat with me about possibly moving to another town to start a new restaurant and I was secretly terrified of losing this great talent. I couldn’t be happier to see my first chef buddy in Laguna turn to a whole new venture in our very own Laguna Beach.

At the end of March, COVID struck just at the time that Craig Connole had decided to exit the Casa and head over to Rumari. The next three months gave the business partners plenty of time to change up the interior, update the kitchen and modernize everywhere – I covered this bit of news in my article on June 9th.

Last week, I was able to try the food, which made for an altogether fabulous evening.

For starters, Ristorante Rumari is following all the recommended protocols in this COVID era, even completely removing dining tables inside and working on completing a back patio for outdoor seating. Lucian Stefonik, the returning General Manager, has done a great job training his front of house staff as well. And, one of the best moments was discovering that longtime favorite server Martin has returned once again. He had left Rumari’s a few months ago to start his own restaurant, but COVID had another plan. Ever gracious, he told me that it was meant to be. 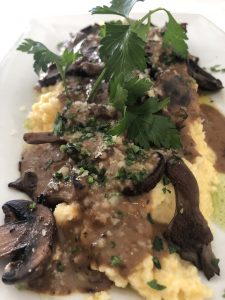 Chef Craig has brought the Ristorante Rumari menu down in size, both to hone his staff’s ability to quickly expedite and to clear the menu of items that were rarely ordered. Although many popular items remain, Chef Craig sheepishly tells me that he’s “tinkered” with a few to “update their flavor profiles.” While he suggests that we try a Rumari favorite appetizer, Spiedino (shrimp wrapped with pancetta), Martin scoffs good naturedly.

“You’ve had that how many times?” he asks me. “I think you should try what Chef has brought to us instead.”

Martin directs us to starters Mushrooms & Polenta and the House Greens. We discover that Chef Craig has chosen to send the Rack of Lamb appetizer to the table, too. One bite of the Mushrooms & Polenta and I’m a different human being. This is sheer craftery … and we’re talking everyday mushrooms and polenta here. It is perfection all the way to its sprinkle of coarse salt on its crown. 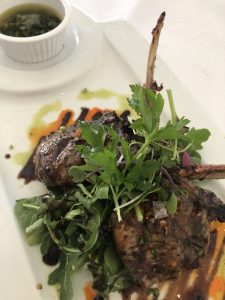 The lambchops arrive next. They’re so beautifully plated I’m initially reluctant to touch them. I’m one of those odd people who has to try lambchops anywhere at every turn. For me, if a restaurant serves lambchops, it is as telling a dish as soup – you can learn anything you need to know about a Chef by his lambchops!

Chef Craig’s revised Rumari Rack of Lamb is simply impeccable. Tender, and super mild in taste, they are finished on the grill and sauced with the Italian version of sweet and sour sauce (Agrodolce). Even my good friend, Ali, whom I’ve brought along with me as a representative of the Surf & Sand Resort, loves this lamb – and she never eats lamb.

Then, the “House Greens” makes its way to the table. It is bright, fresh and beautiful with thin slices of heirloom tomato, red onion slivers, olives, cucumber, and skillet-tossed nuts in a spare red wine vinaigrette. 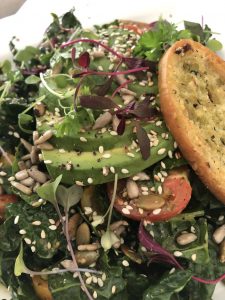 Figuring we have to leave some sort of room for a main entrée (the secondi), Martin clucks over us as we narrow from nine pasta options. Chef has told me that he “slightly reworked” the Rumari red sauce, so I ask for the Rigatoni Bolognese. Martin thinks we should also try the new Gnocchi Al Pesto, so we haggle until he agrees to make half-size portions of each. When the dishes arrive, I can only hope that Chef Craig chose to simply ignore my haggle for half. There is plenty on one dish to feed an army of teenagers.

There are two camps on Rumari’s red pomodoro sauce: Those who love it and those who don’t. There is no gray area here, and it’s long been a point of contention at coffee discussions everywhere in town. 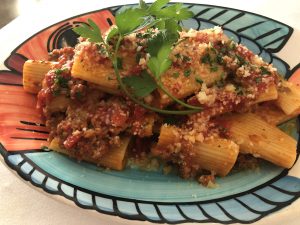 I don’t know if Chef Craig’s “slight tinkering” will cause new drama but I thought it was magnificent. The Bolognese is a gorgeous blend of veal and beef ragu with just the right amount of sauce to lift the flavors from the pasta.

The Gnocchi Al Pesto is a heavenly pillow of fluff. Unlike the usual heavy pellets you commonly experience in gnocchi, this mushroom gnocchi is light in texture and – surprisingly – pan-seared like a dumpling. The sear releases more of that hearty mushroom flavor, and it all blends beautifully with the housemade pesto (called “salsa verde” by Chef) and a fluff of fresh ricotta. 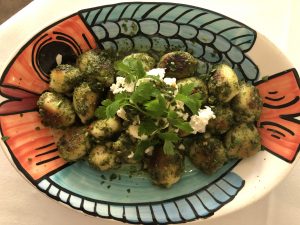 At this point, we’re stuffed. The show, however, must go on. (I can’t write a dining column without a main course, for heaven’s sake.) So, we choose the lightest item on the Secondi menu – Filetto di Salmone – as a split between us.

I love salmon. I love several renditions of salmon in this town (Lumberyard’s planked, 230 Forest’s char-grilled and Royal Hawaiian’s grilled salmon come first to mind.) The new Rumari salmon takes a stage all its own (pictured above). The salmon is so tender, it almost tastes like a poach with a finishing grill. It is the flavors, though, stacked layer upon layer, that make this such a memorable dish.

Fresh peeled heirloom tomatoes, artichoke hearts, basil, asparagus and purple carrots shoulder next to a heaping serving of polenta. Together, they serve as foundation for the generous salmon filet, which is then topped with the Italian salsa verde, minced parsley, capers and tiny garlic bits. Extra virgin olive oil is whisked with lemon juice, red pepper flakes, Maldon sea salt and black pepper to create the perfect dipping partner. The entire presentation is truly magnificent.

Yes, of course the famous Rumari Semifreddo has returned. But, I’m familiar with that dessert, so Martin points us toward the Homemade Cannoli. 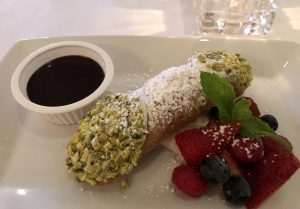 The dish arrives, a plump cannoli with ends rolled in chopped pistachio and a ramiken of warmed chocolate sauce on the side. Martin pours the sauce from way up high and, though we claim only one bite a piece, the dessert magically disappears. (So much for the menu’s recommendation to take one home for morning coffee.)

Dear readers, this was a meal of perfection, through and through. I’m beyond pleased that Chef Craig Connole has found a new level of expression from the foundational Italian cooking roots of his culinary career. In 14 years, I hope we will still be enjoying this Chef’s great contribution to Laguna Beach.