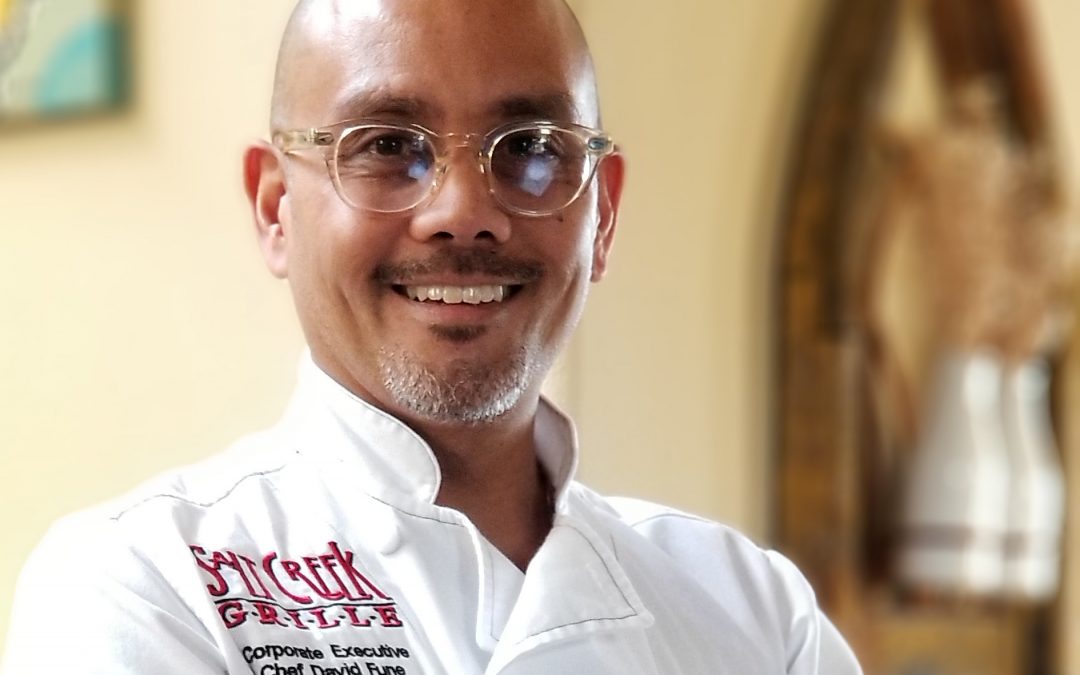 It’s no surprise that some of the most talented chefs get scooped up by the finer resorts and private clubs.

Chef David Fune is such a great talent that he was “discovered” and scooped up 17 years ago.  For years, Chef David operated at a high-level, top-down kind of position, overseeing multiple restaurants, catering, in-room service and more at large, rambling resorts.mBetween April 2013 and June 2015, some of us magically stumbled across his master chefery while he served as Executive Chef of the Surf & Sand Resort. It was a grand and glorious time as he innovated one tasty item after another.

And then … he got snatched up again.

Chef David left the Splashes restaurant and executive chef’s position of the Surf & Sand Resort in the very capable hands of Chef Ron Fougeray and disappeared from the public eye. He surfaced first as the private dining chef at the Balboa Bay Club … I could only watch his YouTube channel videos to enjoy his great food vicariously … and then he bobbed up again last year at the Monarch Bay Club for the Monarch Beach Resort.

Throughout, I complained loudly to him. I whined incessantly. I cried “foul” at every opportunity.

I don’t think he ever listened to me … but he DID make a recent move that is changing the face of Dana Point. Chef David Fune is now the Executive Chef over all the Salt Creek Grilles, the closest of which resides at Crown Valley and Coast Highway on the far south edge of Dana Point. The day he sent me an invitation to his menu media preview was one of the best days I’ve had in years.

A noticeable change a couple months ago
Oddly, I had noticed a change at Salt Creek Grille, even before I discovered he had taken over the kitchen. I’m a regular at the restaurant as I live in South Laguna Beach. Over the last several years, the food has been good, which is (sadly and bluntly) a step above what the majority of Dana Point has routinely offered.

But in the last couple of months, the fare at Salt Creek Grille has moved from “good” to “great,” and I noticed that, as I began to drop in more often, the rest of the world was doing the same. On a regular basis now, Salt Creek Grille is packed.

Chef David’s media invitation put all the pieces together. Of course, the food would suddenly be great – this guy doesn’t know how to do it any differently.

Chef David tells me that he devoted the last couple of months to improving efficiencies in the kitchen and finding way to step up the existing menu items. Now that everything is on an even keel, he’s going to start introducing “a few items here and there,” he says. Any new item from Chef David Fune is an immediate classic. For this reason, my heart and stomach sing with glee. 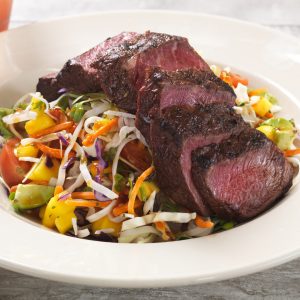 I’ve never been much of a shrimp fan, but Chef David’s Citrus Glazed Jumbo Shrimp had me changing my mind and attitude with wood-fired shrimp tossed with baby tomatoes, citrus segments, kale, garlic, avocado mousse and fingerling potatoes. (Even better, it’s gluten free.) 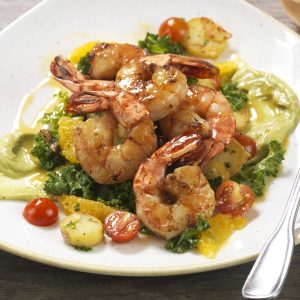 A few nights ago, I dropped in with a friend and split the Crispy Brussels Sprouts with bourbon caramel glaze and smoky chunks of “tavern ham,” and the Meatball Skillet, which arrived popping hot in its own cast iron pan. The latter is (I believe) only served on the happy hour menu, and the fabulous brussels are available all the live long day.

Here to Stay Awhile
Given that Chef David Fune will be overseeing the operations of the Salt Creek Grille restaurants from here to New Jersey, we’re hoping he’s going to stay awhile in “the public eye.” Now that he’s cooking for the main stream (and undoubtedly bringing in all the fans he acquired at the resorts and private clubs, too), be sure to make repeat visits to the Dana Point location where honest-to-goodness spectacular talent resides.