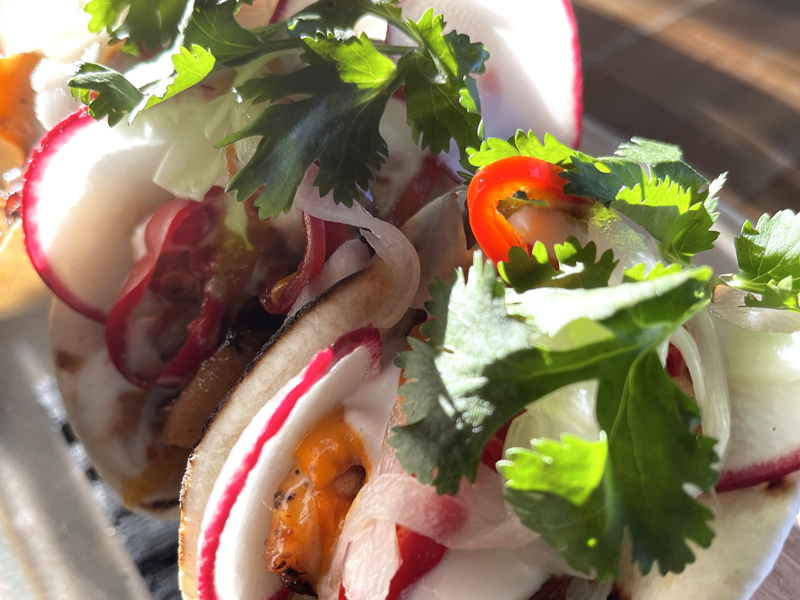 Last Friday, after my second day in a row at Cinepolis in Ocean Ranch to see In the Heights, I gathered fellow movie friends and walked 100 yards to Hendrix, the third restaurant in South OC from Chef Rainer Schwarz and his team. 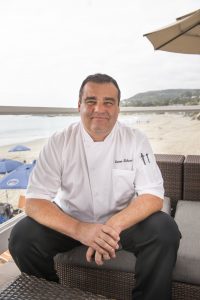 You may be more familiar with Chef Schwarz after his significant entry into Laguna Beach with The Deck Laguna Beach (April 2011) and then, Driftwood Kitchen (June 2014). Then, he and his team revamped the former (and rambling) Fred’s Mexican Cafe & Cantina, opening Hendrix in 2017.

Rotisserie, Yes, But Vegetarian, Too

As a rule, Hendrix has been all about the meat. The largest rotisserie in the land roosts in the front windows of Hendrix, and Chef loves doling out anything from chicken, duck and pork to entire prime rib roasts.

His shared meat platters remind me of something at the king’s table in Game of Thrones, piled high with sausages and various meats with an accompanying giant pitchfork of a fork for serving out your own heaping serving. 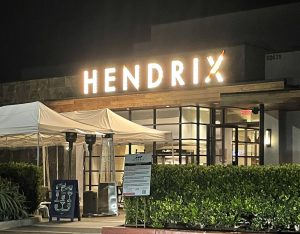 A stone’s throw from his Laguna Beach-based restaurants, Chef Schwarz’ Hendrix is in Ocean Ranch next to the Cinepolis Theater.

But Chef Rainer has always been about the balance between hearty and succulent and fresh and spritely. As you may have noticed, those poor folks in Game of Thrones weren’t treated to much in the way of fresh Hamachi or brilliantly charred brussels sprouts (much less a beet and goat cheese salad), but Hendrix is famous for completing that side of our nutritional table with ease.

“I want to make sure we create a balance to the rotisserie, which can be heavy with lots of meat,” he told me. “The summer menu offers more balance with lighter items and opens up a new round of options for vegans and vegetarians,” Chef said.

Last Friday night, this was apparent with Chef’s introduction of many summer menu items that wowed my crowd. Dish after dish arrived, perfectly plated samples of what’s in store for our summer. If this doesn’t give you hope for our return to all that is right in the months ahead, nothing will.

Chef’s team started our table with the Cream of Summer Corn Soup, a smoky, barely spicy mix of smoked bacon folded into corn chutney with a drizzle of chili oil. 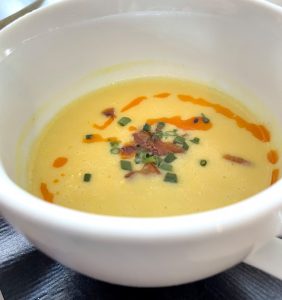 Chef Schwarz’ sample of Summer Corn Soup had us begging for more.

Before we could weep for more, the Avocado Hummus arrived, a super smooth dippy blend topped with cashews and pumpkin seeds. A side of fried pita chips added that comfort food crunch to everything healthy and good. 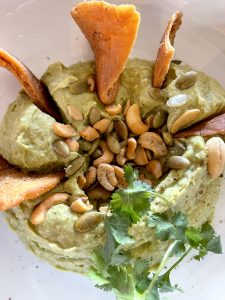 The Summery Hummus at Hendrix is whipped with fluffy avocado.

“I’ve always liked the flavor of hummus,” noted Chef.  “And, with avocado, it takes on a sort of fluffy lightness that’s easy to eat. It’s not overbearing in flavor; it opens up your palate for more.”

Next were the BBQ Octopus Tacos, with a rack of three oversized street tacos arriving in front of each of us. Now, here’s where the rubber meets the road. You might find someone who can make a delectable corn soup or a better than average hummus dip but … octopus tacos? I haven’t heard of such a thing, and I eat out a lot, all over the world.

Delicately poached and then ever-so-lightly grilled, the octopus meat was neatly bedded in a hard corn taco shell and topped with pineapple salsa, pickled fresno chiles and lemon creme fraiche. The wafer-thin radish slices added a lovely, summery tang to complete the treat.

Entrées and Pastas on the Light Side

Then, the Ricotta Gnocchi arrived. This dish follows the precepts of creating gnocchi, but instead of the usual potato as the gnocchi base, Chef chose to use ricotta, instead. Even though potato gnocchi can taste and feel fluffy and light, it has a weight to it that I always feel later. 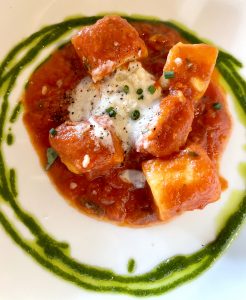 In contrast, this ricotta gnocchi was breezy and light. Basted in San Marzano tomato sauce, topped with buttons of mozzarella burrata and encircled in basil aioli, this was one of the most imaginative gnocchi dishes I’ve tasted.

At this point, were we stuffed? Absolutely, even with the “samplers” Chef was sending out. Did more food arrive? Absolutely.

Pan Seared Diver Scallops were next with a Far East take to enliven the mellowness of the scallops. Fregola pasta (much like a couscous but pasta, instead) and chopped minestrone vegetables combine with curry and capers to serve as the base for the scallops. The scallops are then basted with a Moroccan salsa that, again, delivers a note of depth and heat. 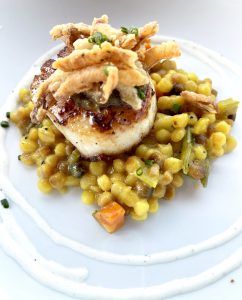 With a nod to India and Morocco in a single dish, giant scallops take on a new taste sensation. 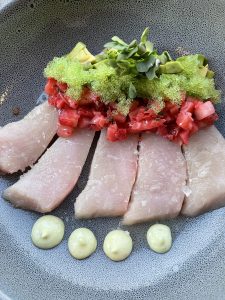 The Hendrix popular Hamachi appetizer is a sublime melt-in-your-mouth treat.

Finally, Chef selected one of his (already) best-selling appetizers, Hamachi Crudo. This dish can easily serve as a full entrée as several freshly carved Hamachi planks are sprinkled with lime sauce and topped with avocado and yuzu emulsion. Even as stuffed as we were, it was a fresh and flavorful finish.

While the chocolate and cheesecake desserts are steady sellers, Chef Schwarz says he’s now working on the summer dessert menu, which will be launching in a couple weeks. “I’ll be adding in some stone fruit items, freshly baked pies, that sort of thing,” he noted.

Safety is the Key to a Glorious Summer

As crowds are definitely increasing, Chef and his team will continue to offer the expanded outdoor seating as an option well into the future.

“We’ve fought our way through this last year, and we’re all hoping we’re on the other side. We’ve always done the right thing, and that’s what we’re going to keep doing. It’s important that – especially now – our customers and our own staff members continue to feel safe.”

“We can all have a great summer ahead, and we’re doing everything we can to make it super memorable and special,” Chef Schwarz said.