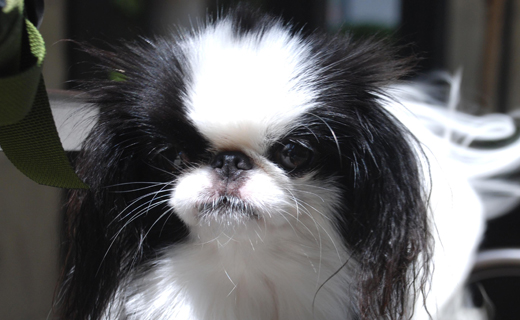 Mochi’s Name Even Bigger Than His Stature

A Japanese Chin, this tiny guy looks downright stern until you get within a foot of him – then he becomes Laguna Beach’s new “Greeter,” all wiggles and smiles. Mochi is not yet 2 years old but he’s known far and wide in Laguna Beach because his person, Jeff, takes him everywhere.

As dog people go, Jeff looks more like the kind of guy who’d have a chocolate Lab or one of those sleek Ridgebacks. In fact, he’s the first to admit that he never really liked small dogs. He inherited his first Japanese Chin from a grandparent, though, and he’s been hooked, heart and soul, since. When the first little guy passed away, Jeff found a second of the tiny, barkless breed and, when that one lived its full life, Jeff went back to the same breeder for Mr. Mochi. Small wonder as little Mochi IS a small wonder.

Mochi and his person just moved back to Laguna Beach after a few years in Newport Beach. The two decided they preferred the small-town feel of Laguna and figure they’re here to stay.