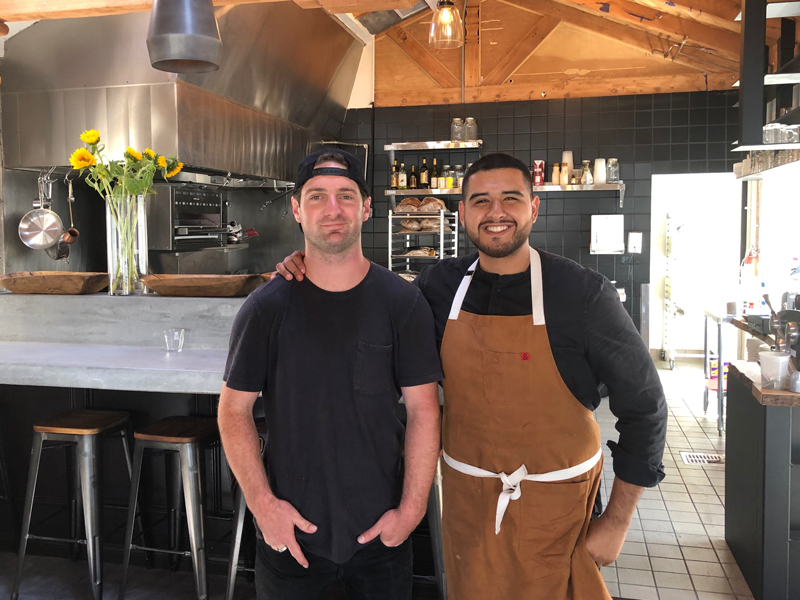 After a rare U-turn last Thursday in South Laguna, something strange caught my eye … actual PEOPLE moving around in the former Eva’s Caribbean Cafe. There were tables out front and people were SITTING at them. What the heck was going on?

I called the City. Yep, Anthony confirmed: A new restaurant by the name of AHBA had just received its business license and was in full operation. Right there, under my nose.

AHBA is our town’s newest restaurant, thanks to Chef/Owner Nick Bennett. Growing up, his best friend always called his dad “ahba,” the Hebrew word for “father.” The word stuck with Nick and, when it came time to create a relaxed, easy, warm environment in his new restaurant, he knew it had to be called the same.

AHBA’s culinary roots are primarily Mediterranean with an “angle” toward Isreali casual fare. The team is initially serving breakfast and lunch, with plans to eventually expand to dinner, too. 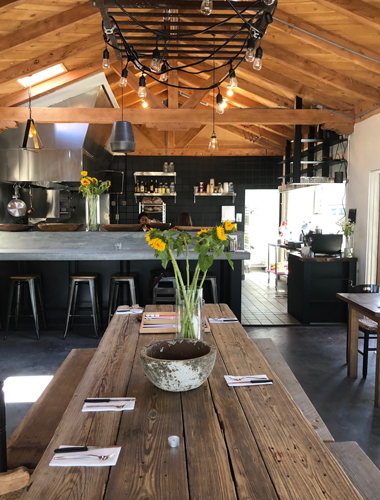 The minute you walk in this place, you feel charmed. AHBA is built for community and friends, whether you’re grabbing a coffee at the bar that looks into the open kitchen or sitting at the long community table. The few patio tables are a mish-mosh of style and colors; it feels like an impromptu party in a friend’s backyard.

The menu is written by hand on scraps of parchment paper. It reminds me of a long-ago visit to Silver Lake’s famed Mh Zh, an Israeli café that still has people queued in waiting lines that snake down the block. To this day, they still write their menus on random slices of butcher paper.

Born and raised in L.A., Nick says he’s grew up in the restaurant industry. He’s a self-taught chef, having started cooking in his mom’s kitchen as a kid. He hadn’t necessarily planned on ducking under the “Orange Curtain” to take up shop in South Laguna, but he fell in love with the building. And, when you fall in love with anything, everything changes.

At this point, Nick  surprises me once again by mentioning that he developed his menu with his Chef de Cuisine, Jayro Martinez.

“Jayro is here?” I ask, completely bowled over. Sure enough, here comes Jayro with a big grin and a hug for me.

I first met Jayro Martinez when he was the Executive Chef of the uber-popular Social restaurant in Costa Mesa. At the time, Chef Jayro and his Social culinary team were participating in my favorite non-profit event of the year – Illumination Foundation’s OC Chef’s Table at Disneyland. The event gathers more than 40 celebrity and ballyhooed chefs for a phenomenal night of foodie feasting. When Chef Jayro asked to be a part of the event, it was a very happy moment for all of us – he’s one extreme talent.

Prior to Social, Jayro (pronounced “Hi-row”) cut his culinary chops in the catering world before opening the afore-mentioned restaurant phenom, Mh Zh, with a friend.

Now, it all makes sense – the menus, the cool, relaxed feel, and the wonderful tastes that begin to emerge from the kitchen. 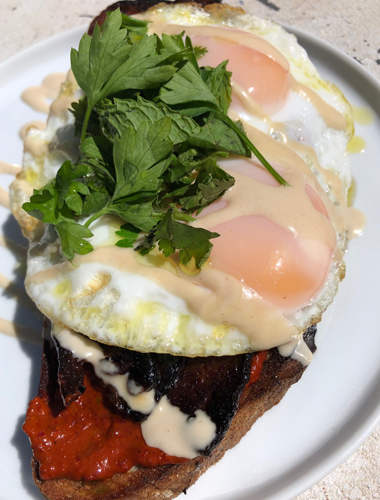 First, it’s Harissa Toast. Harissa is a spicy red pepper paste that normally includes ancho and chipotle chiles to amp up the heat. In AHBA’s version, the paste is slathered on the toast with crisp bacon, caramelized onions and two eggs ladled above. It’s sprinkled with cilantro and mint leaves, a lovely, fresh-bite balancing act to the hearty fare. 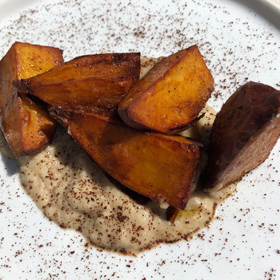 Then, Chef Jayro trots out with Japanese Sweet Potatoes, initially soaked in a secret world of spices before baked and ladled onto a swirl of sweet onion purée. The plate is sprinkled lightly in coffee dust. 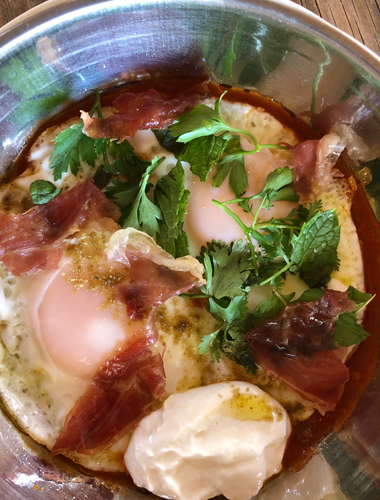 My favorite is the Shakshuka. It’s another large dish that lays down a tomato based sauce absolutely plucky with coriander, cumin, fennel and cardamom.  The sauce is swirled with Labneh (strained Greek yogurt) and then topped with crispy prosciutto and eggs.

“We wanted to create a menu that felt more intimate, like we were making this food in our own homes for friends,” says Chef Jayro.

Adds Chef Nick, “This place is a gathering place for friends and family, and we want everyone to feel like they’re part of our family. We want people to feel welcomed into our home.”