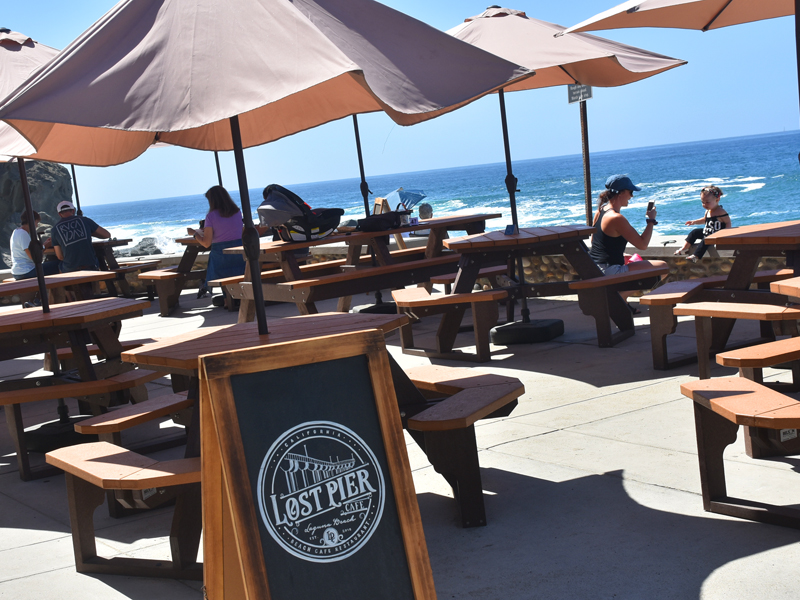 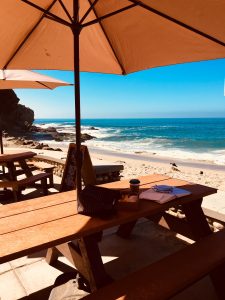 You’re not going to believe this. I finally found a truly great cup of morning coffee in South Laguna. It’s in the uncanniest of locations: The Lost Pier café.
Right.
I already know your question: “Lost Pier Café? Excuse me?”
Correct.

In the last few months, while we Laguna residents were bustling about our lives, Mark Christy and his friends at The Ranch Laguna Beach were quietly re-opening the beach café at Aliso Beach.

If you were around when the Yellow Umbrella snack bar was in play, you might remember that it was attached to an actual pier. Constructed initially in 1971, the Aliso Beach Pier was a true icon with a rare diamond shape. Standing 35 feet high and 660 feet long, our lovely pier served residents, fishermen and tourists well despite repeated beatings from El Nino storms in 1983, 1986 and 1997. Finally deemed unsafe and too expensive to re-create, the pier was demolished in 1999. 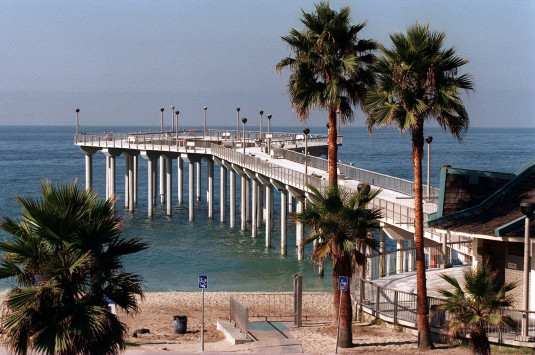 Sacrifices to the Aliso Pier Gods
Just a few years ago, a new beach café and restrooms were added back onto the beach. Repeated attempts to operate the beach café to profit, however, proved as depressing as the loss of our beautiful pier. It was almost as if the gods of Aliso Beach Pier required a few sacrifices as supplication and reparation for the pier’s loss.

And, then, Mark Christy came along.

Mark is one of the lucky residents who, on many occasions, enjoyed the pier and its Yellow Umbrella snack bar. Despite all odds, he has demonstrated obvious love and devotion to reviving The Ranch property across the way. And, his own General Manager Kurt Bjorkman came up with the name for the café, Lost Pier.

By the looks of things, it seems that the Pier Gods are, at last, mollified.

I live just down the sand from Aliso Beach, so have visited the café on a few occasions. It has quickly become one of my favorite enclaves with its welcoming umbrellas and ocean surf just a few yards away. It is absolute peace and serenity on weekdays. And, even with the summer crowds tucked away, the Lost Pier continues to operate from 8:00 a.m. to 3:00 p.m. daily.

Frankly, the Lost Pier won my heart with my first cup of coffee. Not only is it a great tasting cup of coffee, but the staff adds the milk in before handing it to you.

I’ve only seen this practice in operation at Tim Horton’s in Canada, and it brings back fond memories of actually seeking out the donut chain in Montreal and Toronto because they always pour the milk in for me, like some kind of doting mother or grandmama.

The Lost Pier staff welcomes you like family, too. They are warm, energetic souls with a complete understanding of a somewhat complicated menu that is a far cry above the common fare of hot dogs, fries and chocolate-dipped frozen bananas.

It helps that The Ranch Chef Kyle St. John has been involved in the Lost Pier’s menu development, and that his own cooking staff can support the café’s own kitchen. While some menu items may sound similar to what’s offered on the Harvest restaurant menu, these beachside items have been tweaked in a beautiful way for this sunny, outdoor clime. 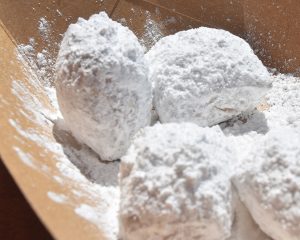 Paper Bag Beignets show up warm from the oven and rolled in at least a half-pound of happy powdered sugar. They are melt-in-your-mouth goodness. A giant Egg Sandwich boasts sausage and gooey cheese.

And, while my weekly Breakfast Burrito at Harvest Restaurant is one of my all-time favorites, the same-named burrito at Lost Pier may be one-upping its older sister with thick chunks of smoked bacon liberally rolled in with the eggs and potatoes – absolute heaven. Avocado Toast, Chilaquiles and Granola & Yogurt round out vegetarian offerings, too.

Power Lunch
After 11:00 a.m., the menu turns its eye to lunch fare with more unusual offerings such as hefty freshly-made salads, Hummus & Avocado Sandwiches and a towering BLT along with the more standard fare of cheeseburgers, quesadillas, fries and hot dogs (albeit it’s a Wagyu Hot Dog, so even that isn’t quite the standard fare) 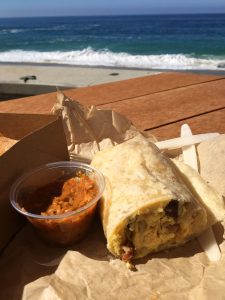 The menu’s fish offerings are tantamount, though, with super-fresh Ceviche and Poke, a daily catch take on Fish & Chips and Fish Tacos, and even the rare appearance of an overstuffed Lobster Roll.

I’ve tried the Fish Tacos and the Carne Asada Burrito – both pass with flying colors, particularly in fresh taste factor and relative steamy heat, which is normally lacking in cooked items at a beach café.

Freshly baked chocolate chip cookies and “The Balboa Bar” (the iconic frozen dessert that every beach café requires) round out the dessert menu.

It’s OK to Be Unprepared
Keep in mind that parking at this lot does not cater to Laguna “shopper” stickers. You’ve got to feed the meter, or park on Coast Highway and amble down to the café. If you do choose to just pop in and stay awhile, the Lost Pier sells sunscreen and beach towels, and rents beach chairs and umbrellas, too. Bjorkman says they’re also working on providing portable fire pits. And, beer and wine permitting should finally be sorted out in the next few weeks ahead.

Most important to me – they’re hoping to have consistent wi-fi in the near future so that we can even bring our laptops down for a couple hours of solitude, sun and solidly fun food fare. 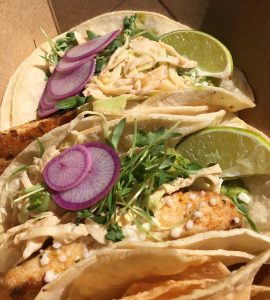 The Iconic is Back
Clearly, I have a fondness in my heart for The Ranch as Christy and his staff have proven diehard loyalty to Laguna locals while still catering to incoming visitors. I feel the same fondness for Lost Pier, and it’s probably due to the very same fact – this café might look like it caters to our visitors, but it is downhome local, through and through.

Take a moment in the next few weeks to find your way to Lost Pier. It’s a great reminder as to why you chose Laguna Beach in the first place.