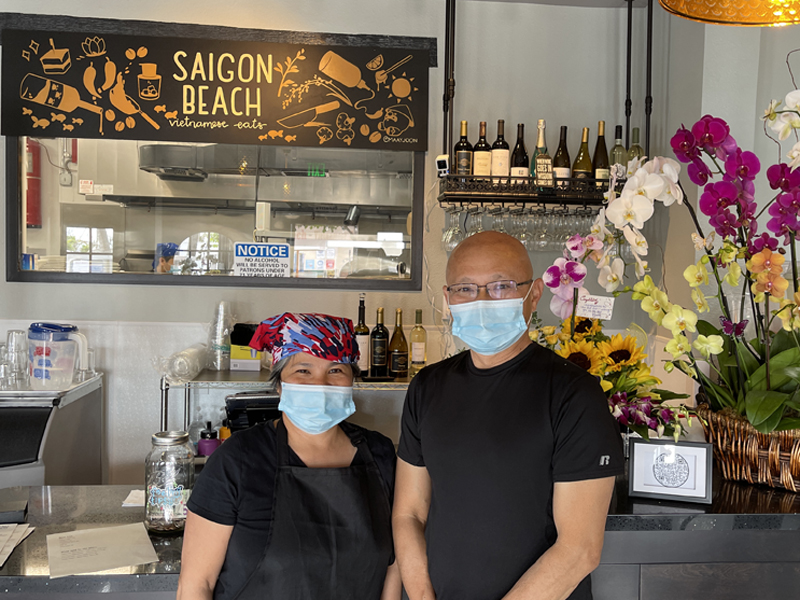 It’s been exactly two years and eleven months since the former Royal Thai went dark, waiting for a new breath of life. She finally got her wish when new owners Phong and Lan Vu opened the doors to Saigon Beach Vietnamese Eats last Thursday. 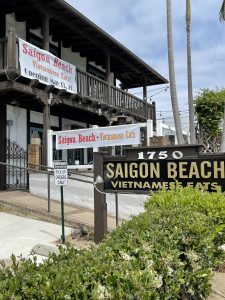 Saigon Beach Vietnamese Eats has opened next to Mozambique.

“As you can probably guess, it’s been a much longer timetable than we first envisioned,” said Phong, “But were finally here and we know it’s where we’re supposed to be.

“On our first day last Thursday, a couple Laguna police stopped in, and they called on the radio to let all their peers know, so we had a busy restaurant right from the start,” said Phong.

An engineer by trade, Phong says his wife, Lan, has been the driving force behind the restaurant business. Ever and always interested in what she could create in the kitchen, Lan initially started with a yogurt and sandwich shop 17 years ago.

Chefs just can’t help but expand their repertoire, though. With urging from his successful uncle, who opened the first Vietnamese restaurant in Minneapolis in 1975, the couple opened Saigon Beach in Newport Beach in late 2016.

With rave reviews on Lan’s unique take on banh mi (the heavenly Vietnamese version of a flaky baguette stuffed with meats or vegetables), Saigon Beach in Newport Beach was an immediate hit, and still ranks consistently as one of the Top 100 Restaurants in the United States. Two years later, it was time to expand (because that’s what chefs do). The couple considered Huntington Beach, but felt drawn to Laguna for the local vibe

If any of you remember the dark wood and ornamentation of the former Royal Thai, you’re in for quite a surprise at Saigon Beach. Simple, chic modern is the name of the game for the dining room, with a brand-new kitchen’s shiny stainless-steel winking from behind.

“We swept everything away and started from the ground up,” said Phong. “We had the opportunity here in Laguna to create a bigger kitchen that would accommodate more of a gourmet menu along with catering fulfillment, and we’ve taken full advantage of all this space,” he added. 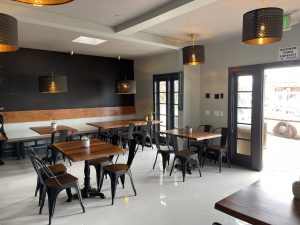 This is a sophisticated counter service kind of place with wine and beer options to keep you company as your food is prepared. It is a casual eatery (seating outside, too) with fine food fare.

“It seems that the locals have a passion for food here,” Phong explained. “And, as our Chef says, we didn’t come all this way to cook ordinary food.”

While Lan and her fellow chef have transported a few Newport Beach favorites into the new Laguna restaurant, they’ve spent time crafting a new menu specifically for Laguna Beach that leans more toward gourmet Vietnamese.

Chef specials and favorites adorn simple chalkboards, while paper menus with accompanying QR codes for scanning offer an extensive array of Vietnamese food at its finest. 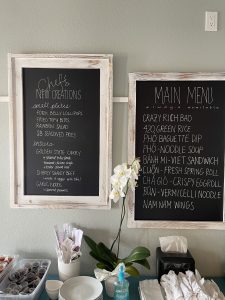 Adds husband Phong, “The 420 Green Rice didn’t have a name for the longest time, but many of our customers told us that is was seriously addictive …so, thus the name.”

Saigon Beach is open in Laguna Beach seven days a week, 11 am- 3 pm for lunch, and again from 4 pm to 9 pm. The parking lot is available to Saigon Beach clientele for both dine-in and pick-up.

I’ll be trying the food at Saigon Beach in short order, but feel free to send me your comments and photos about our newest restaurant’s fare by DMing me at Instagram or Facebook @BestofLagunaBeach. I’ll be happy to feature your best photography!