On Sale March 20th, Outstanding in the Field Comes to Laguna Beach 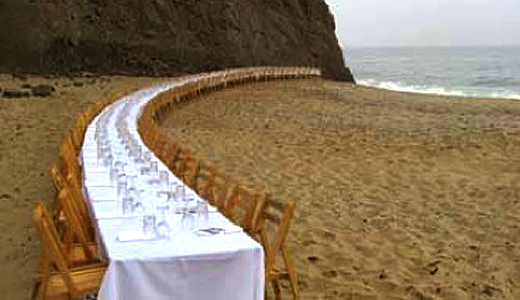 I’m writing this with sincere trepidation. This event is so awesome and glorious that I’m afraid all you readers out there will actually get tickets before I’m able to elbow my way in.

(Sigh.) It’s so awesome and glorious, though, that I am simply compelled to tell you anyway …
Quick history: Last fall, when the Laguna Art Museum sponsored its first Art & Nature Festival, its biggest hit was a stoic giant of a man, Jim Denevan, who spent days out on Main Beach creating an enormous sand mural that he then lit with solar lights. It was spectacular.

As you might have read in my Laguna column back then, I’ve been a huge fan of Denevan’s for many years as he’s actually the mastermind innovator behind the company, Outstanding in the Field. This entity is basically a “portable feast” that roams all parts of the world, setting up one ultra-long dining table that seats as many as 150 people. The table will show up in the strangest of places – fields of corn, on bridges that span large rivers, in vineyards, and on beachy inlets everywhere. Jim and his crew then COOK an entire meal, relying primarily on local organic products to create this memorable outdoor feast.

So, here’s the deal: We talked Jim into bringing his feast to Laguna Beach on November 6th, Thursday afternoon/early evening. It’s a kickoff for the Art & Nature Festival and benefits the festival and LAM.
This is truly monumental, given that Outstanding in the Field only does about 65 feasts each year for the entire North American continent. I’ve been to one of these dinners before, and the $300/person price tag is a bargain-basement price – trust me on this.

This will be one of the most memorable dinners of your life.

Here’s the catch: You have to act very quickly on March 20th to grab your tickets. Each year, the Tour is announced in February, but tickets for EVERY Outstanding in the Field feast location go on sale the first day of spring, just minutes after midnight. Next Thursday morning, March 20th, virtually every single feast will sell out in a matter of hours, Laguna Beach’s being one of the forerunners, assuredly.
Fair warning. For the treat of a lifetime, set your clocks now