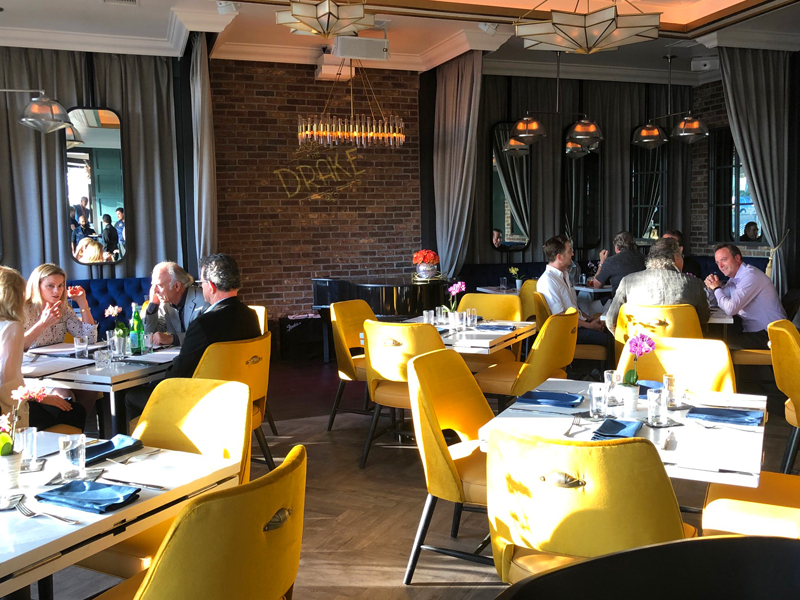 Last night was the official “opening night” for The long-anticipated The Drake Laguna Beach.

It was an impeccable experience, which is a rare thing to say on a restaurant’s opening night. 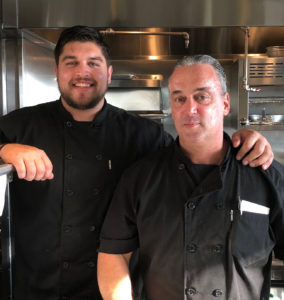 Yes, they’re still stepping into their stride, but for a 0-day-old restaurant with just a smattering of rumored family and friend dinners last week, The Drake is acting like it’s been doing this a long, long time. Small surprise as Executive Chef Paul Gstrein has been cooking for the world’s finest restaurants for decades now, and his son, Nick, is right here next to him, carrying the baton forward.

It’s been four years and two months since Tabu Grill closed in this space. I chose to sit at the chef’s bar with the same open kitchen, and it brought back a flood of happy memories.
When Tabu opened in 2004, it was one of the first of the swanks in town, joining the likes of 230 Forest and Clae’s. Its arrival opened the door to a new kind of culinary mecca here in town, a graceful nod to fine dining that proved the world had not gone the way of the “fast casual” scene.

Today, The Drake Laguna Beach took on the mantle … not only from Tabu Grill but from the original Drake Hotel in Manhattan that created such an impression on Alec Glasser that he felt compelled to carry its grace and timelessness forward to this space.

“It’s been in my mind for so long that it’s a little overwhelming tonight to see it all in reality,” he said, beaming. “We want this to be a great place for Laguna.”

What’s in Store on the Menu

The menu isn’t overwhelming, and that’s a good thing. The Drake is starting with seven appetizers, three salads, and 10 entrées. With entreés alone ranging from Maine Lobster to chicken, pork, scallops, two fish and 4 meat dishes, there’s plenty of opportunity for everyone. 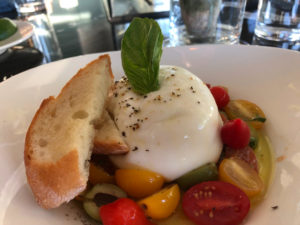 I tried the Mozzarella Salad, a significant serving of the freshest Burrata with baby heirloom tomatoes, roasted pepper strips and a surprisingly welcome scatter of briney green olive slices. My neighbor tried the Triple Brie Alpine Melt, which proved a miniature homage to the alps themselves. She claimed it was the best she’d had.

Though I’m not sure I can ever stray from the Mozzarella Salad again, a passing plate of Lamb Lollipop appetizers had me coveting.

Chef sent out a sampler of the Venison “Diane,” (thank you very much), and I must say I’m delighted to have this menu item bearing my name. Served up with “exotic mushrooms” and polenta, it was priceless. 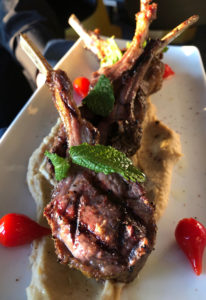 For my entrée, it was the Filet Mignon with a potato trio and peppercorn sauce. Perfectly cooked with potatoes in every fashion, and a decent pour of Luigi Bosca Malbec in a wine glass that, alone, made me feel pretty special. 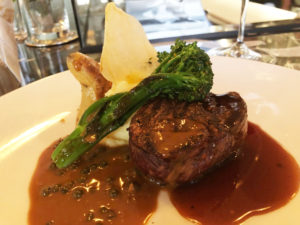 With live jazz and piano lilting from its opening at 5:30 p.m., the Drake’s bar lounge settled in as if it had been doing this for decades. In fact, the entire restaurant feels as if it’s been here for decades. The Drake Hotel in Manhattan may have been demolished in 2007, but its spirit seems to have found its new home here in Laguna Beach.